I’ve been accused of bringing the English weather with me as Saturday saw plummeting temperatures and steady rain for most of the day. While I’ve been mentioned in the same breath as the word ‘witch’, I think that my punishment will stop short of me being burned at the stake, but just in case I’ll be avoiding black cats in the short-term.

I couldn’t stay away from the house in Lineiras so I braved the rain and went to measure up the floor of the Cabazo (grain store) so that I can buy a sufficient quantity of rough cut chestnut next time I am here. Turns out that I need just seven and a half square metres, which when I mentioned it to Neil got a reaction that made it seem a bit pathetic. But I guess when he is building his own house totally from scratch, and totally by hand, he does usually deal in much larger quantities.

Dodging the rain, I also paid a visit to next-door-but-one neighbours Miro and Elena, the former still in bed at 11am and the latter out in the barn feeding this years’ pig. Knowing his inevitable fate of later in the year, I didn’t enquire about his name, I though it better not to humanise him in any way. He’s a massive beast already, there will be plenty of chorizo and every cut of pork imaginable to get our neighbours through the winter, and it looks like it might be necessary.

Why, you may ask?

Well. Neil and Rosa were kind enough to invite me out last night to what was supposed to be a dinner-dance, but with the poor uptake of tickets it turned out to just be a dinner, which suited Neil and myself brilliantly. During the excellent meal, Neil and Rosa told me that when they came to open their wood burner to get it ready for the winter they discovered an active wasp’s nest. Half a gallon of petrol and a match quickly solved the problem, but their neighbours told them that wasps in October are a sure sign of a bad winter. Now Neil is fitting his snow tyres. 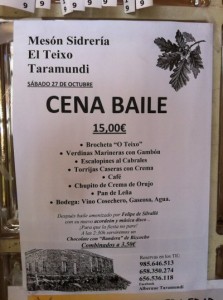 The meal was in the youth hostel in ‘O Teixos’ which sounds fairly down market but was far from it. It is right up in the mountains and there was some talk of impending snow.

The dining room was spacious, warm (with a lovely open fire), welcoming, and better than many local restaurants.

The food was good, hearty, local Asturian fare served with good lashings of beer and Orujo (the locals home-brew that resembles the schnapps/vodka/gin or any other liquor made in someone’s garage out of left-overs from the harvest). All this for just 12 Euros (the additional 3 Euros in the poster must have been for the omitted ‘dance’ part).

The proprietors were great, their whirlwind young son crashing into the patrons and furniture like a spinning top. They made me feel very welcome. This is how restaurants should be.

Today is a lazy Sunday, and an hour longer to be lazier in than yesterday. A leisurely walk, a nice morning coffee, and then off to watch the Grand Prix and grab some more free-ish internet in Consuelas bar.

Tomorrow, my last day before I am back in the UK for a week, will be somewhat busier with meetings at the house with the carpenter and the builder.

This entry was posted in Local Life and tagged Asturias, Food, Neighbours. Bookmark the permalink.