A turning point is reached

Today marked a turning point in the barn renovation, my builders descended on site in numbers (well…two of them) and actually started construction.

To add to my levity I awoke to found that Ramon’s Internet has been switched back on in the apartment, the downside being that I don’t have the excuse of no Internet access to justify a couple of beers in the bar.

Also, the sun shone, for the whole day. It has been a good day here in paradise.

There was a general strike today, as Dolores said at the bar last night, ‘there is a lot of very angry persons’. Riots in Madrid and across Europe were the order of the day as the working man (and woman) protested the austerity measures which have brought Spain and Greece to their knees. But it seems that no-one told Galicia where is was business almost as usual. The only effect that I felt was the failure of the architect, and architects safety person, to arrive on site as previously arranged. 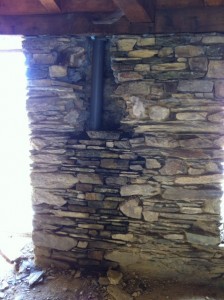 The strike must have affected the telephone network and e-mail too as neither was used to communicate to me the cancellation of the appointment, nor to apologise for the ‘no show’.

But in reality I didn’t care because when I arrived on site at 8:30 this morning Angel and my new friend from Mondoñedo, Obi ( desperately want to add Wan Kenobi each time I say it), were hard at work installing the tube for the bathroom extractor and hiding it behind a new section of traditional stone. This wall will eventually be left as natural stone, so it is important that the work looks authentic and I am delighted that it is Angel who is doing it. 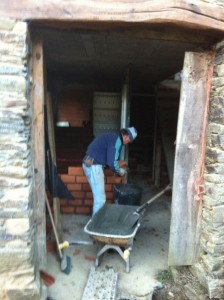 After four days of inactivity the excitement hit fever pitch when Facundo arrived with the housings for the sliding doors which will be installed in the bathroom and bedroom. These are hefty contraptions which are built into the partition walls, and this is what Angel and Obi spent the rest of the day doing, until is was too dark to see how much mortar they had on their trowels.

Once they start work, they do work hard. But not too hard to stop them being led into conversations at regular intervals. These are mostly about football, drinking, eating, the economic situation, and their other English client – who shall remain nameless). I’m glad we’re paying a fixed price.

I decided to spend the day moving a big pile of wood and slate, which used to for the roof of the pre-renovation cabazo, and which had lain across the old road through the property since the work took place a year ago. I salvaged all the wood which could fuel our stove and then shifted a dozen wheelbarrows full of broken slate onto the dump, all the time thinking that the same stuff would be over a hundred quid a tonne back home for use on peoples rockeries.

Now my back is killing me. I need to get back into the swing of things. Pass me the painkillers.