Bad parking, the long drive, and a plate of fried fish

I have a friend back home who provides a public service by photographing badly parked cars and submitting the images to a website, with a particularly vulgar name, to out the offenders and subject them to public humiliation. He’d have apoplexy here, and ultimately no-one would care because everyone does it. There is no shame.

The tactic is to find a piece of tarmac, verge, pavement or wasteland as close to the place you want to visit and leave your car there, preferably at a jaunty angle which blocks in as many of the other inappropriately parked cars as possible. For extra effect, leave on your hazard warning lights, but lock up the car with no intention of returning until you are ready.

Cars park two or sometimes three deep. They block the main carriageway of thoroughfares, park across pedestrian crossings, on the corner of blind bends, over people’s drives or in the entrances to shops. There appears to be zero enforcement, and zero implications for the offender. The bizarre thing is that there are plenty of public car parks and these are usually have empty spaces and are totally free to use. It’s laziness or the Spanish mentality, or both!

Yesterday I visited a new (opened April 2011) retail park in A Coruña called Marineda City (the largest in Spain) with our friend Dolores. I took Dolores mainly for her company on the 3½ hour round trip, but also so that she could ask any questions of the shop assistants in IKEA (looking for a sofa-bed and kitchen) and El Corte Ingles (perfume for Amanda) in a far better and more persistant wat than me. It was another ‘details’ day.

The roads were as glorious as the weather, with not a single hold up and barely another car in sight for the 200 mile round trip. I stuck to the limits, to save any further points against my NIE number, and the tolls were just fifty cents (40p) each way. The retail park was only finished last year and it is absolutely massive, guarding the entrance to A Coruña from the motorway. 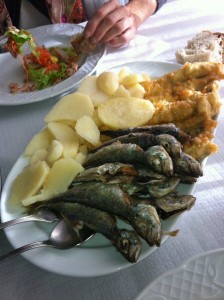 I confirmed that IKEA has the sofa we’d spotted in England, and the kitchen that Amanda likes in the colour she wants, so my mission was quickly accomplished. Dolores was the only one who left with ‘items purchased’; two cushions, a lamp, some toys (for her consistently hungry cats) and perfume.

As we made it back to the motorway to Lugo, it turned 3pm and we agreed that we’d stop for lunch at the first services. No concrete monstrosity housing McDonalds or Burger King here though, instead a functional roadside restaurant on what used to be the main road before the motorway was built. Drinks, bread, a massive tuna salad, and a big plate of fried fish and potatoes all washed down with a nice milky coffee, quickly made me forget that I’d not eaten for twenty-four hours. 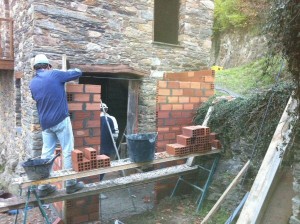 All the above was consumed for a measly 8.50 Euros each, just under seven quid. Much cheaper, much healthier, and much better for the body and soul than the rubbish we’re expected to pay for and eat when held hostage on England’s motorways.

After being away for the whole day I couldn’t resist visiting the barn on the way home to find that the outer skin of the porch was almost complete and the barns internal walls were being prepared for plaster.

All-in-all a good day, which deserved a few Friday night beers with Neil in Casa Paulino to give me chance to recover from the exhaustion of listening to, and speaking, Spanish for the previous nine hours.

This entry was posted in Places to Visit and tagged A Coruna, Barn, Galicia, Speaking Spanish. Bookmark the permalink.