Thank goodness for the upgrade

Stood staring through the plexi-glass at the nice lady from Atesa, I did something that I’ve never done, or even considered. I accepted a car upgrade.

When hunting for a hire car on the internet in advance of our trip, I began to realise why this was our first trip to Galicia in a July. We’d hit tourist season and the usually extremely reasonable prices for car hire had gone through the roof. A car with plenty of space was impossible to find for under 400€ so I’d reluctantly agreed to a Vauxhall Corsa, or similar, for 120€ for 6 days.

It would be a tight squeeze, particularly knowing that Amanda’s shopping list for the impending trip to A Coruña went to several pages, and when I was offered an upgrade I didn’t deliver my usual speedy ‘No, gracias’.

The deal on offer was for an intermediate sized car for an additional 42€. I could scarcely believe my ears and checked that the price quoted wasn’t the daily uplift, but after confirmation I signed on the dotted line and took possession of the keys for a nice ‘brown’ Citroen C4.

I may not have been so keen had I been told it was brown, not a nice friendly brown, but the kind of brown which… well, is best not discussed in polite company.

Perhaps the French are having a joke at Spains expense, I can almost sense then sniggering behind their baguettes.

It turned out to be cavernous, and by heck did we need it. 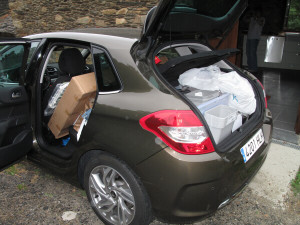 The second mission through IKEA ended up forcing a full to empty and re-load of the car and despite some concerns over whether our entire bounty would fit, we managed to pack it to the rafters (if Citroen C4s have rafters). With the rear wheel arches resting on the rear tyres we set off on the 150km return trip to the barn. 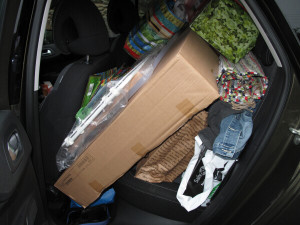 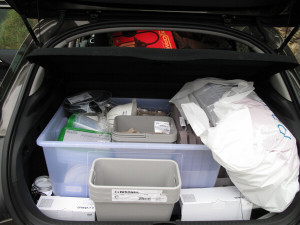 Did we get everything that we needed?

The list for the next trip seems almost as long as the one that made a decent dent in the credit card this time, and we’ve no doubt improved IKEA‘s profits for 2013/14, doing our bit to spend Spain out of its recession.

And if we’d not had the upgrade? Well Amanda would have spent four hours waiting in the underground car park at IKEA while I took the first load home, or we’d have had to get quite a few refunds.

This entry was posted in Local Life and tagged A Coruna, Asturias, Barn, Galicia, Roads, Shopping. Bookmark the permalink.