Any Excuse for a Party

The Spanish will throw a party to talk about organising parties. Personally I think that as a nation it is one of their most endearing qualities, indicative of their all-embracing sociable nature.

Spain has almost double the amount of bank holidays that we get in the UK. They  have a habit of not forcing most of them into Mondays, when the celebration date truly falls on a Tuesday or a Thursday many people create a Puente (bridge), on the day before or after, to extend to a four day weekend. A proper break.

But they don’t only rely on public holidays, they will throw a fiesta at the drop of the proverbial hat, and some for the most obscure of reasons and causes.

I’ve previously mentioned the Trout Festival in A Pontenova, and the nearby Chestnut Festival at Saldoira. There was the very  late night music festival associated with the consumption of Wild Boar in Taramundi, and ever since I heard about it I’ve wanted to be in Galicia for the Percebes (goose neck barnacle) festival in Rinlo. And that barely scratches the surface. Every village, no matter how small, has its own annual fiesta and in rotation over a number of years each village fiesta gets elevated to the top festival in the region where the villagers fund food, drink and entertainment for their near village neighbours.

The last time we were out in Galicia our Spanish friend and mentor Dolores trumped our offer of a trip to the market in nearby Meira, with the suggestion that we visit the ‘Cockle’ (Berberecho) festival in Foz, a fifty kilometre drive from the barn.

A party dedicated to celebrating the humble cockle! 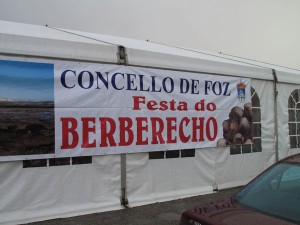 We were intrigued and not a little amused.

So on Sunday lunchtime we took a jaunt through torrential winter downpours to the windswept summer surf capital, now abandoned by the summertime throngs of VW Camper vans, knee length wetsuits and bronzed bodied barbecues, leaving the locals to their own off-season company. 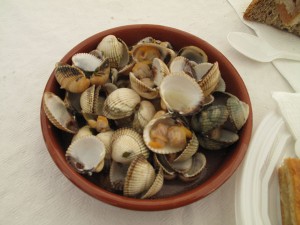 The whole fair was contained within a single big white tent down on the harbour, with an industrial heater at one end and a local gaita group piping their pipes and drumming their drums.

We bought a book of vouchers for food and drink, selected cockles three-ways to share and three plastic beakers full to the brim of local white wine. With great culinary anticipation we joined the throngs of locals on the communal tables to sample the fare and shout to one another in an attempt to be heard above the local Celtic music. 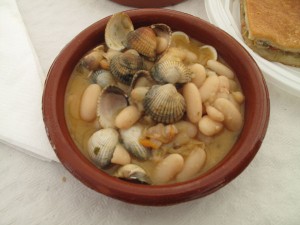 We shared our three dishes; cockles cooked in white wine and garlic; cockles with local beans (fabas); and a cockle empanada, all with lovely locally baked fresh bread.

They were delicious, a cut above your usual fast food kebabs and burgers, and washed down with a ridiculously good local white wine for 80p a glass (plastic beaker).

Yet another storm moved through, drenching those brave enough to make a run from their cars to the tent, but we were warm inside with full bellies and ruddied cheeks thanks to the heat from the jet engine heater in the corner.

Another fiesta under the belt, but I’m still waiting for my goose neck barnacles (Percebes).

The berberecho fiesta was sponsored by the local council and ran for three days, during which time three tonnes of cockles were consumed by the hungry residents, and temporary party visitors to Foz.

And believe me, that is one hell of a lot of cockles.