The Cost of Carpentry

One thing that seems very expensive in Spain, and I’ve probably mentioned this before, is carpentry. Given that about ninety percent of Galicia is covered in trees, and that the raw materials have always been surprisingly cheap, I can only suspect that most Spanish carpenters value their skills at a level just below those of a brain surgeon. I’m guessing that they have a secret cartel which meets once a year at some special ‘carpenters conference’ where they set the prices artificially high for the forthcoming year.

After a lot of searching we found a brilliant company over the Asturian border in La Roda, about a 40 minute drive from the house, who made our windows, doors and staircase at a reasonable cost and a very high quality. Their price was half that of our most expensive quote, and fifty percent cheaper than the next cheapest. Their work was great and we were delighted with the results.

The identical twins who own the company, most unsettling when you never see the two of them in a room together, are willing and eager but until recently we have found them to be stuck in their doors, windows and staircase ways.

Having previously failed miserably when enquiring about internal doors and fitted wardrobes, with a polite ‘no’, we decided to give them one final throw of the dice and sent them a couple of technical drawings for structural bookcases which we need to turn our lounge and kitchen from its current ‘death-trap in waiting’. 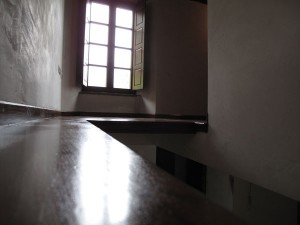 At the moment there is nothing but the ‘thinnest of air’ to stop you from having a horrible accident by carelessly stumbling down the opening for the staircase and falling two metres to the ground floor. While it is just Amanda and I, neither of whom are knowingly prone to clumsy calamity or dangerous sleep-walking, that isn’t a major issue. But with Mother tagging along on our next trip in mid-March, our hyperactive young neighbour Oscar visiting regularly to ‘borrow’ and play games on my iPhone, and various other friendly ‘drop-ins’, it has become a priority to make the upper floor of the barn people safe.

I’m no technical drawer. The last time I held a ruler and set square was when I was fifteen years old and Mr Lister was trying to instruct a rowdy all-boy class on ‘plan and perspective’ when his charges would have rather been kicking a football around the playground. I’m also far from convinced about my ability to take accurate measurements and when undertaking simple woodworking tasks I tend to go with the ‘measure five times, cut once’ approach. And I am definitely not a designer, not even of simple bookcases.

To our delight one of the twins from La Roda responded, but only after a second prompting e-mail, with a cost and a few questions about my drawing, which had clearly fallen somewhere short of the mark when scrutinised by someone who had to translate it into a tangible thing.

We answered the questions, gave the go-ahead, and enquired whether the shelves would be available to collect on our next visit. But then the expected silence for it is the Spanish way. So now it is ‘fingers crossed’ that there will be something to pick up when we travel in March, and that they will fit in the car that I have hired.