It’s just a week since we returned from a week-long working visit to the house, and already it seems like an age ago. We switched to Spanish time, where one normal hour passes in around twenty minutes, as soon as we landed which meant that the drive to Liñeiras was pretty fast.

The downside was that the rest of the week just flew by with one day merging into the next as we ticked off the pre-planned tasks on a long mental list.

One of the jobs was a perfect ‘killing two birds with one stone’ opportunity, although no birds were actually harmed during its undertaking.

Several of the ruined houses on our rambling estate ware looking a bit worse for wear due to the large amount of undergrowth and trees which have made them their home. I was conscious that we needed to start taking them down before their roots undermine the foundation-less walls and their trunks start their inevitable quest to push the walls over. 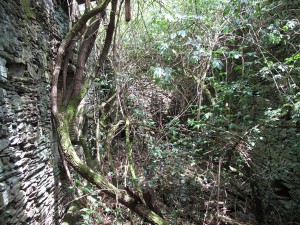 While we have no immediate plans to renovate these particular buildings, as custodians it would be remiss to allow them to fall further into disrepair and beyond the rehabilitation skills of even the most dedicated restorer.

The ‘second bird’ benefit was that the trees would yield plenty of logs which would go towards bolstering next winters stocks sat in the wood store.

So one sunny afternoon we dusted off the pruners, sharpened the axe and fired up the chainsaw. Three hours later and we had cleared the forty square metres of floorspace of everything but the most stubborn trunks and three hours after that the soon-to-be burnable wood was in manageable logs which had been split and safely stored under-cover. 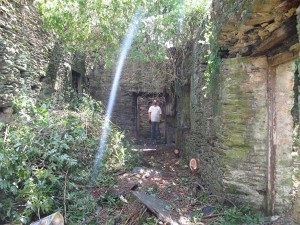 It was tiring but rewarding, and although the timber is of fairly poor quality it should provide a few nights warmth in the depths of the next Galician winter. In case you are concerned, that is me with the axe taking a breather in the background, not a ‘Here’s Johnny’ moment!

Now…where can I get a cheap stump grinder?

This entry was posted in Barn Renovation and tagged 13, Barn, Lineiras, Renovation. Bookmark the permalink.