After being away from the property for a few months, there is a well practiced order in which I look at the house and land when arriving along the road from Pontenova.

First priority; has the roof collapsed on the big house?

Secondly; does the barn look okay, windows intact, no sign of any damage?

And finally; what state is the land in, and are we on the verge of a ‘denuncia‘ for being overgrown and a fire-hazard?

On first approach in early June I’d mentally ticked off the first two before casting my eyes over the finca and blurting out, ‘bloody hell, where’s Enrique‘. What had greeted us was an overgrown jungle of grass and weeds at between waist and chest height without natures lawn mowers anywhere in sight.

Over the last four years, it really is four years since we took ownership of our corner of paradise, Carlos has become our self-appointed caretaker. He lives a two minute walk away, parks his car and motorbike in our garage, harvests all our fruit at the end of the summer (and keeps), and provides the livestock who keep our rampant vegetation in check.

So far this year he’d obviously let us down. 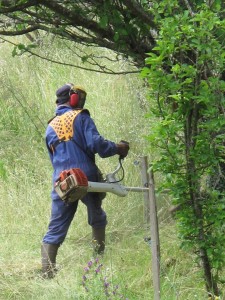 He has always had a sixth sense about our arrival. Sure enough, within twenty minutes of unloading the car he was there, loitering with intent, bursting to tell us something, ask another favour, or state the obvious. Before I had chance to ask after his donkey he was straight in with his question.

‘Can I put my horses on your land’.

We didn’t have to think too long before we answered, almost in unison, our decision reinforced with vigorous nodding heads. That’s the Galician equivalent of someone offering to mow your lawn every week for the next three months.

He was back within a couple of hours wearing full safety gear and equipped with a heavy duty strimmer and set about clearing a corridor in which to erect his electric fence. 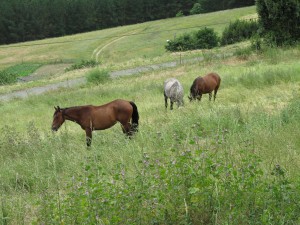 After an hour of mechanical grass control he disappeared, to we know not where, and returned with three horses (although worryingly there were four last year, perhaps it was a hard Winter), our new equine lawn mowers.

Our fears of neighbourly complaints slowly melted away from our consciousness as the grey and two chestnuts went about their business, turning our grassland into fertiliser.