Tomorrow, the 17th May, is a local holiday, the Galician Day of Letters.

With a Tuesday being a day off, there is obviously no point in working on a Monday, so we got a text from the builder last night to say that we’d not see his crew until Wednesday morning.

On Wednesday they will be accompanied by 290 square metres of chestnut planking which Amanda and I have the unenviable task of sanding, treating with anti-woodworm solution and then staining ready for installation once the beams are in. I’m not sure how long it will take us, or how long we’ll have before they need it to install, but I’m not really looking forward to it. It’s going to be a gruelling few days.

We’ve used the few days downtime over the weekend and todays ‘puente’ to get the allotment (huerto) started. Following last week’s potatoes we now have onions, broad beans, peas, carrots, parsnips, lettuce and radish. Tomatoes, chillies and melons are all in seed trays, germinated, and ready to go.

The downtime which meant a cessation in the clank of heavy machinery and the shouting of Spanish workers has also meant that our ‘outdoor cat’ kit has felt brave enough to venture out. She played in the field while we were working in the huerto and in the space of a couple of hours she’d murdered; a mole, a rather large and fierce looking rat, and had managed to get herself a small bird from somewhere. All were strategically placed to ensure that we found them on the way back to the barn. It’s not as if we don’t feed her.

On the house the work is continuing at a rapid pace. It is difficult to comprehend what a team of four can do in six days.

After stripping the roof on Monday and Tuesday, the rest of the week was spent using an industrial sand-blaster to strip three hundred years of soot and grime off all of the internal walls which we are intending to leave as exposed stone. 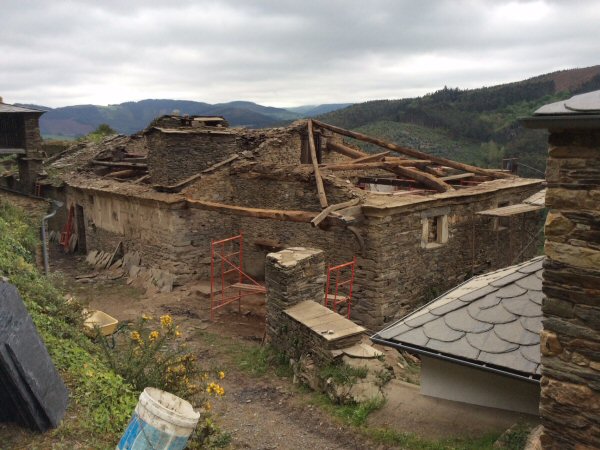 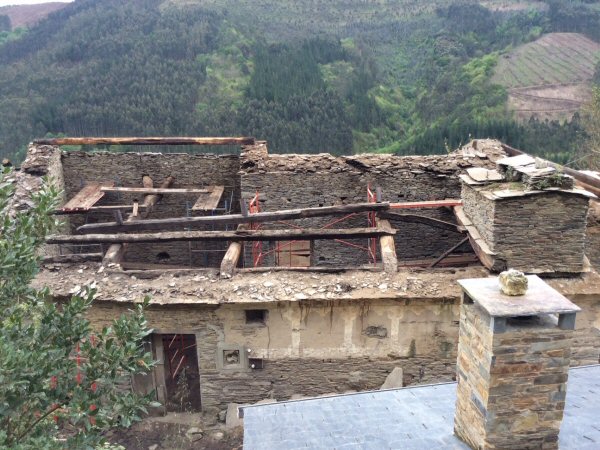 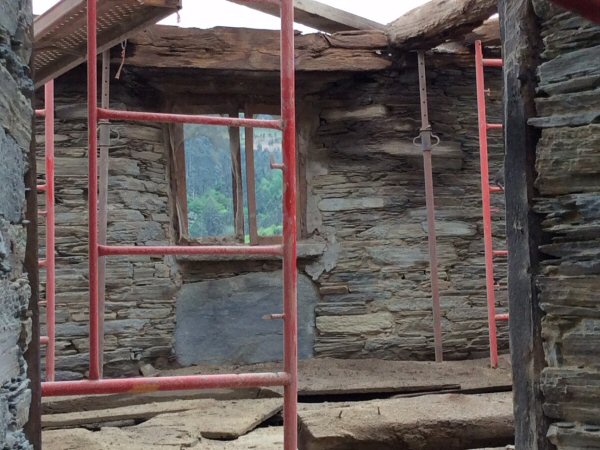 As the machine was on site they also used for a first pass on the chestnut beams which they ended the week sanding with angle-grinders and sanding disks, and which I will finish to a smoother end result once the roof is on and I can get some quite time to potter at my own leisure. They’ve made a tremendous job but the down side is that the whole site is now covered in five centimetres of sand and crud from the four tonnes which they blasted over the course of three days. The heavy rain over the weekend has meant that the clean-up will be a nightmare.

The house looks magnificently different. It seems twice the size that it did with a roof on and Amanda and I are even more excited at the prospects for using its myriad or rooms, levels and nooks and crannies. Just a small lottery win and we’re laughing.

There has also been some very sad news since my last post. One of our neighbours, a lovely man and good friend, lost a long struggle with cancer and passed away at the age of 79. It was Amanda and my first experience of an open casket in a funeral home and, on Friday, of a Spanish Catholic funeral. I am hoping that neither are things that we have to attend with any frequency in the future.