Since the day we first bought the house we’ve been told, nay assured, that it contained a small fortune in buried treasure.

The onset of the recent works means that the local gossip has reached fever pitch with neighbours we’ve not seen for months making a special ‘casual’ walk past the property, take us to one side, and remind us that we need to be on the lookout for the hidden wealth of gold within the big house walls.

We’ve been advised to watch the builders every move, as if they were to find anything of value it would be spirited away, and the next we’d see of it was when one of the workers turned up in a brand new Rolls Royce.

Local folklore would have us believe that the original owner and builder of the house was one of the richest men in the area. During one of the many phases of building that we’ve uncovered during the renovation, he apparently hid a fortune in gold, and then forgot where he’d put it. It remained hidden until his death over two hundred years ago, and has done ever since. It’s a story that all the neighbours know, and one which they are happy to whisper to us, out of the earshot of the builders (who are nothing short of pirates!).

Amanda and I just smile and nod. We know that for the thirty years before we bought it, our house was in the guardianship of Carlos (the owner’s brother) who used it as a pen to fatten his pig and keep his chickens, a barn for his donkey, and a store for his potatoes. We know, that he knows, the rumours and if there was anything of value to be found, we’re damn certain that he’d have found it at some point in the last three decades.

There are local stories of treasures being found in old properties, and more commonly hand guns wrapped in oil cloths, which were secreted during the civil war. So on the first day that the builders arrived I joked with them about gold and guns.

Frequent shouts of ‘oro’ (gold) have been heard to ring out around site, followed by laughter, but never a reveal of the shiny stuff.

Despite me thinking I had ‘cleared’ the house in advance of the works, there have still been a few discoveries, but sadly all worthless.

These have included; four porcelain ornaments (two of which have subsequently mysteriously disappeared), a congealed bag of boiled sweets, a full bottle of white wine (subsequently smashed), two pairs of rusted pliers, a small child’s prayer stool, a copper and brass manual crop sprayer, two pairs of football boots (size 43), a small black & white TV set, and the most macabre find being a hoof and ankle joint of an ancient ham (pictured). 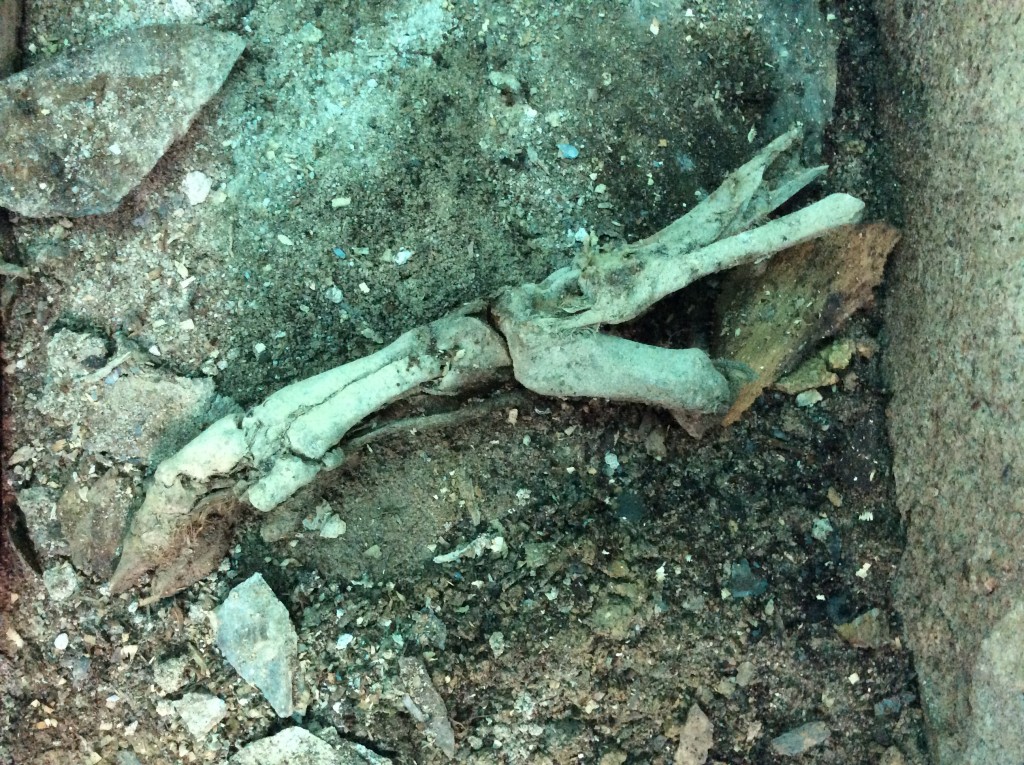 Despite the odd break to examine and discuss these finds the work has been proceeding at a fair pace, mostly in the bright sunshine which prevails between the odd shower. The builders start at 8am, stop at 11 for a nice cold beer (from our fridge), break for a 75 minute lunch at 1pm, and then carry on through until 7pm. There is definitely no mañana attitude in Galicia, these guys work hard, usually while I stand and watch and give the occasional thumbs up.

Amanda and I have worked hard though. To save a bit of money we took just under five days to treat and colour 290 square metres of timber planks, and over sixty new joists, which are now being hauled and battered into place.

The result, even on a half finished building, is nothing short of superb. All of the original beams were in good condition once three hundred years of soot and woodworm had been cleared from the outside centimetre or two, with a sand-blaster and angle grinders/sanders. Now they’ve been cleaned down they look fantastic, and once the builder has finished his work we will be spending time finishing these, treating them, and making sure that they are a real architectural highlight of the house. 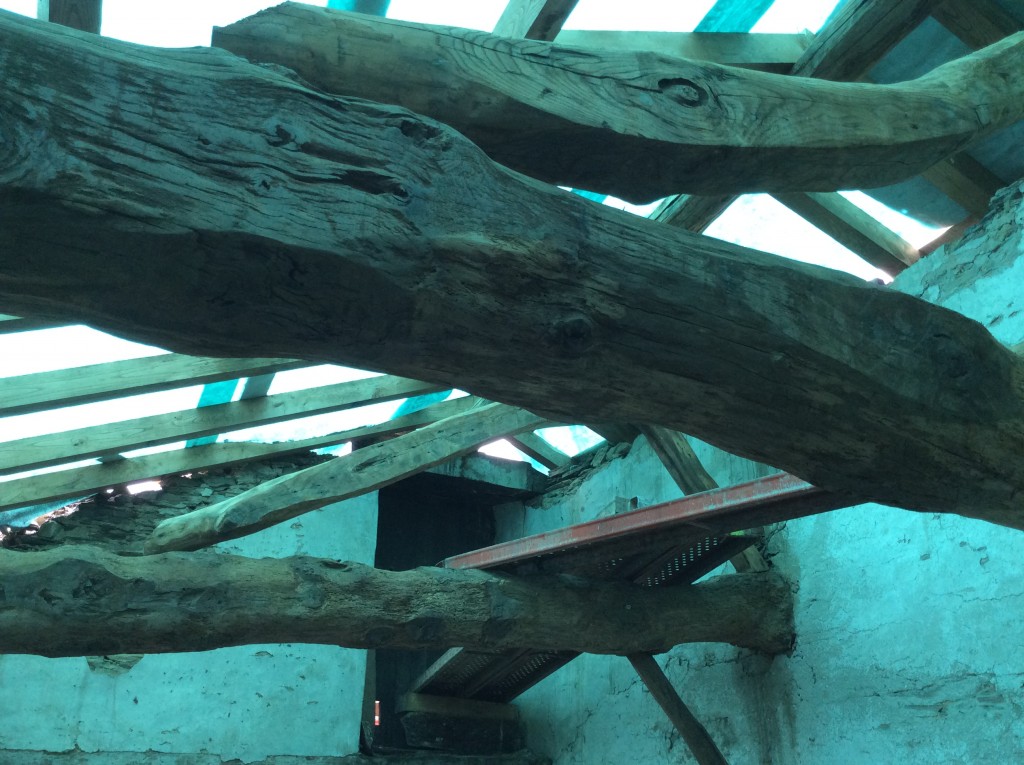 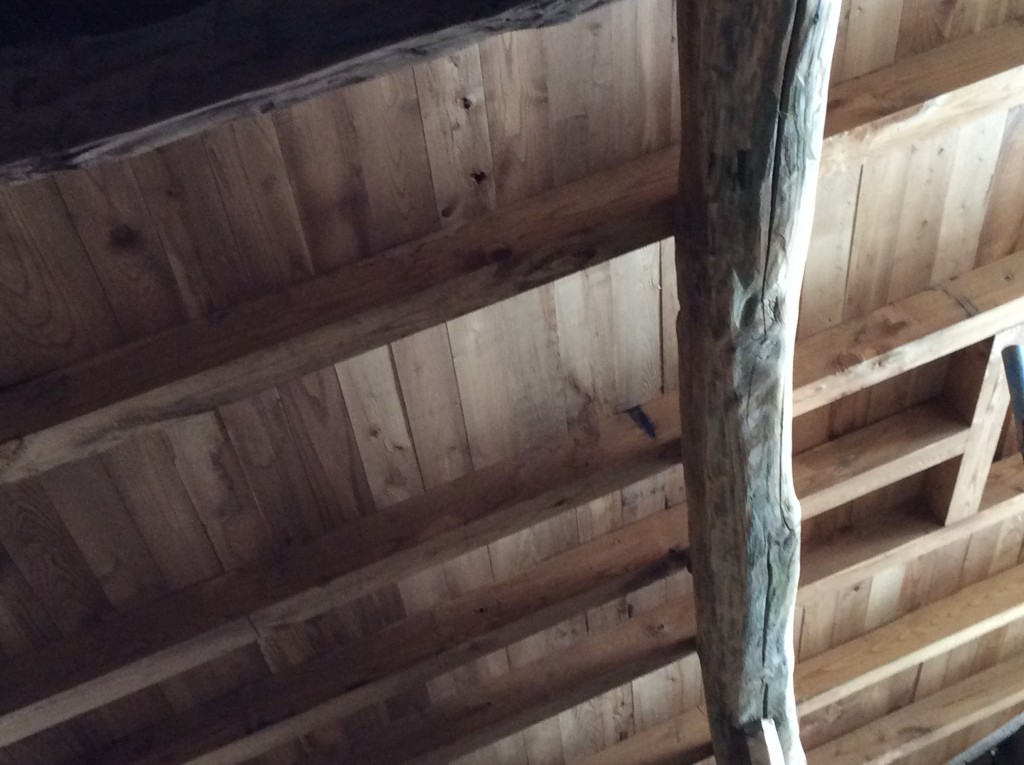 The roof is going on in two phases, the first is half complete but the second has not yet started. This means that there is still a part of the building which has not been stripped and the roof removed. Perhaps this is where our untold treasures will lie, and where our fortune will be found?

Rest assured, I’ll be keeping a close eye on the builders.