I’ve always had terrible phobia of wasps and as with my only other weakness, ice cream, it is all the fault of my Mother.

Some of my earliest memories are of my Mum shrieking and flapping her arms about like a crazy woman because she’d spotted a wasp within a hundred yards of us. On one occasion she abandoned me in my perambulator in the middle of a dual carriageway to escape a solitary wasp and save her own skin. And I remember being severely reprimanded, it might well have involved smacked legs, for poking at a wasp with a stick on our driveway at home.

As a kid, whenever the word ‘wasp’ was uttered in our house I followed Mum out of the door flapping a squealing like a girl until Dad killed it, and declared that our home had once again returned to being a wasp free safe haven.

I think that it is safe to say that I really don’t like wasps.

‘How big is it? What do the wasps look like? How many are there? How do I get my blood pressure down?’ 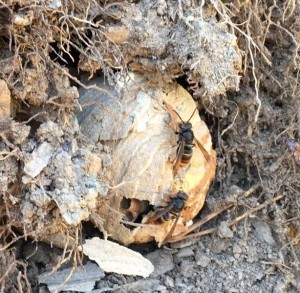 Amanda shouted back that it was about the size of a tennis ball (see the picture), quite small in the whole hierarchies of wasps nests. The ‘wasps’, it turns out through consultation with my ‘Insects of the British Isles and Western Europe’, were actually Asian Hornets, a particularly unpleasant multiple-stinging’ one inch long, armour plated ‘pain machine’. There were less than a dozen, but more than half a dozen. My blood pressure, it seemed, would remain high for the foreseeable future.

‘Kill them with fire!’, he said, one of his stock answers to any question about problems with natures fauna. ‘Alternatively, wait until late evening or a cold morning, pick the nest up with a plastic bag, and then smash the hell out of it with a big rock, perhaps then burning it for good measure‘.

We looked for a local Rentokil operative but the nearest office was three hours away in Vigo. As it was Friday afternoon the local council was now deserted for the weekend so we had no option other than to take matters into our own hands, or in reality, for Amanda to ‘man-up’ and deal with the problem.

So this morning, after I’d suffered a sleepless, worry and wasp filled night, and while I cowered in the house on the verge of tears, Amanda tucked her trousers in her socks, pulled on a hat and thick gloves, put a scarf around her mouth and nose, and did the deed.

Since ‘the exterminator’ did her stuff we’ve had a couple of them come by to visit the site of their old nest but we suspect that the size of it meant that they’d just started building, and that Amanda’s swift actions will force them to find a new home, hopefully not on our finca.