Winter is coming and it’s time for a general update after a mostly uneventful summer.

We’ve entered the season of cooler mornings and evenings rather than the wall to wall heat that we’ve experienced over the last four months. The allotment is looking fairly empty as we’ve just tomatoes, carrots, lettuce and parsnips on the go. With a potato ban in the A Marina area, under pain of a €4,000 fine, we planted produce in a smaller area than last year but we’ve still managed to harvest 200 decent sized onions, 5kg of peas and 1 kg of sweet corn as well as plenty of lettuce and carrots.

The best crop of the year was courgettes/marrows which went wild early in the growing season and saw us eating; ratatouille, stuffed courgettes, courgetti, courgette cake, courgette stir fry, courgette curry and courgette salad. We gave loads away and now ten or more large marrows are rotting away in the vegetable patch as we just can’t bring ourselves to harvest and eat any more. 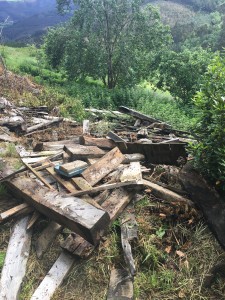 Little has happened with the big house as we wait for licenses and permissions from the local council and the Xunta de Galicia. We’ve built a few steps, put a slate floor in the bread oven, constructed some planters, excavated one of the rooms in the big house of waist deep detritus (which included taking six cubic metres of household waste to the local dump), and tidied up 300 m2 of ancient chestnut beams, planks and roof panels from where they were dumped in front of the big house by the builders last summer. They are now neatly stacked by the barn either for re-use or cutting down into burnable chunks. 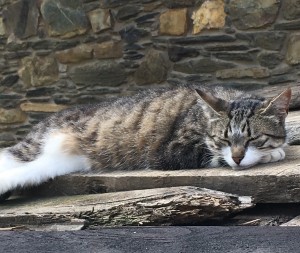 On the coming 3rd October Amanda and I will have been married for twenty-five years, which is a bit of a miracle as I was certain twenty-four years ago that she’d have killed me by now. For the last few months she’s been talking about a couple of nights away in a nice hotel to celebrate, but some of the hotels mentioned had alarming price tags associated with them. One mentioned was the Parador in the main square in Santiago de Compostela, reputedly the oldest hotel in the world which has played host to royalty, dignitaries, politicians, sportsmen and pop stars. On checking the internet it was quoted well in excess of €200 a night!

Now for €200 I could buy a decent lithium batteried cordless drill, or a circular saw with a couple of blade options and a laser sight, or a nice wood router and loads of bits, or even pay a speeding fine (yes I’ve had another of those over the summer).

So I hatched a plan which I thought was foolproof. I suggested that we walked the Camino De Santiago for our anniversary, or at least the last 115km from Sarria to Santiago. I did some basic calculations that we’d need five days of walking, that we could stop in cheap hotels and that arriving on the 3rd of October Amanda could have her one night in the five star Parador before we came home.

But she called my bluff. ‘What a great idea’ she said. ‘I’d love to do that’.

So now we’ve spent a small fortune on; rucksacks, walking poles, walking boots, trousers, solar phone battery charger, non-blister socks, blister plasters for when the non-blister socks let me down. Not only that but we’ve had to go into training and regularly walk a eight kilometre circular route from the barn up into the mountains and back again.