A ‘bewilderment’ of architects

On the internet I’ve found a number of suggestions for the collective noun for architects. These include; ‘charge’, ‘confusion’, ‘glass house’, ‘jealousy’, ‘bewilderment’ and ‘arrogance’. There seems to be no consensus.

We’d been collecting architects as we’d gone along, a bit like you might collect beer mats or stamps but less tangible.

This was our fifth time in Galicia since starting our quest. We’d got the key to our future home and business, and an ever lengthening list of potential architects. All were keen and willing to help us, although I suspect that all could see big ‘€’ signs, and were desperately hoping that the English that they’d just been introduced to had bottomless pockets.

One thing which is for certain is that architects are nice people. Every one that we’d met were friendly, open, warm, human and all but one spoke English. But the thing is…they aren’t ‘wired’ up in the same way as you and I. When you say the words ‘inexpensive basic renovation’ their in-built architect translator makes them hear ‘design something revolutionary, inspirational, award winning full of new technologies and techniques…and to hell with the budget’. Their sociable external demeanour seems to hide a psychotic core.

So far on our travels we’d met; José from near Tui, Gonzalo from Santiago, Antonio from Lugo, Juan from Ribadeo and then the day after we bought the house Ramon introduced us to Fernando from A Coruña. After seeing the beautiful architectural site survey that Fernando had undertaken for one of Ramon’s houses (our estate agent and new neighbour) we were smitten. We bundled him, and his assistant Luz, into the car and forced them to come and see our house. We had to have a survey, to know what we’d bought, what all of the rooms measured, and to see if anyone could actually penetrate the forest that was growing in the ruined houses. 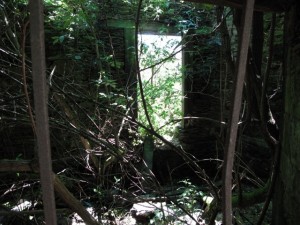 Fernando made all the right noises, re-assuring us that we’d made a good purchase, commenting on how grand the house was, and that the size of the horno(bread oven), at Liñeiras 13 it is a separate house from the main house, meant that this truly was a high status property back in the day. He made us feel smug, and we liked that.

He encouraged us to find out what the local name was for the house that we could use for the business, identified some masonry which he believed would have been the base to an impressive dovecote and he even made friends with Carlos’ moth eaten donkey, who’d now taken to stamping his hooves aggressively whenever he saw me.

We asked him for a price to undertake a full architectural survey and give us a set of plans similar to those that we’d seen him deliver to Ramon, and if the price for this was right then we’d suggested that we’d like him to come up with some outline ideas for the small house, the one which Carlos’ donkey was currently guarding.

The rest of our final day went quickly, and early the next morning we were on our way to the airport for our trip back to reality. No more visits were planned, all our hopes were with Fernando to get on with the work, and then to need us to visit again to see the plans.

This entry was posted in Background, The House in Liñeiras and tagged 13, Galicia, Lineiras, Ramon, Trece. Bookmark the permalink.

1 Response to A ‘bewilderment’ of architects