Always time for a Spanish holiday

Colin Davies (Thoughts from Galicia) blog yesterday was all about tuesdays Spanish National day, a national  holiday across the whole of Spain where everything vaguely commercial grinds to a halt, families congregate, and parties are had across the land.  As Colin points out, he is not sure if such a National Day exits anywhere else in the European Union, but it is certainly popular in Spain.

There isn’t a National Day England where the closest thing we have is St Georges Day, celebrated by the sporadic unfurling of the flag of St George, and cheap beer promotions at any pub left open as the recession continues to close them at an astonishing rate. No one in England gets the day off for St Georges, and it’s even the case that some of the ‘political correctness’ brigade would like to see any recognition of the day stopped as it could be seen as racist. Imagine the reception that such a suggestion would get in Spain?

The Spanish have overt national pride, but what they also have is a mass of public holidays which put our measly eight to shame. Every region of Spain has a maximum of fourteen public holidays, nine of which are national and the remaining five are regional. Galicia takes full advantage with its own fourteen, which are;

But the festivities don’t usually stop there. Where these fall on a Tuesday or Thursday then the preceding Monday or following Friday are also seen as ‘fiesta’ days where people either take vacation days to make a long weekend or simply have a ‘duvet’ day. 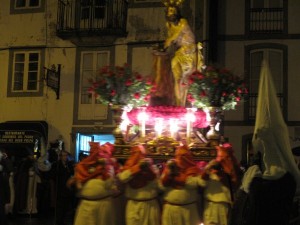 On public holidays you can expect the following (taken from here);

In addition to these public holidays most Spaniards, except those involved in the tourist industry, take their vacations in August, some for the entire month. Central Spain empties with businesses closing for the entire month including shops and restaurants while their staff head to the cooler coast for some respite from the heat. This is the time when Galicia gets busy with the usually deserted roads heaving with Madrillenos (people from the nations capital) all looking for good food, great beaches and moderate temperatures. It is also the time when town and villages hold their Fiestas. Every small village around has their own day and own party, including Liñeiras (second weekend in June).

Spain is a nation which fiercely guards its holidays as time for families and parties and feasting and drinking. Now that’s what I call a civilised society!