Meeting house criteria, the lure of the green

After forty-two years on this earth, although I acknowledge that I do look like I’ve been here a bit longer than that, I think that I am qualified to put forward the hypothesis that there are two types of people shuffling their way around our mortal coil trying to make the best of what life throws at them.

‘What are these two types’, I hear you cry.

My two types fall into all of the categories above bisecting sex, religion, personality and whether or not you have a penchant for ‘council house’ TV programmes. I am, of course, talking about golfers and non-golfers.

I fall wholeheartedly into the former category, while Amanda can’t see any pleasure in spending hour upon hour whacking a small white dimpled ball up-hill and down-dale with expensive metal sticks, wearing stupid jumpers you wouldn’t be seen dead in outside a golf club while getting drenched, sunburnt or eaten alive by the local wildlife.

When we sat down at the start of our house-hunting quest, and agreed on the criteria for our perfect house, I managed to sneak in ‘within 30 minutes of an 18-hole golf course’. I used the reasoning that we could offer ‘golfing holidays’ and that I had loads of mates and acquaintances from my ten years of Huddersfield golfing that would love me to cook them a big breakfast, ferry them to and from a nice golf course, and spend a long night serving them beer and whisky. Close proximity to a golf course would sell the Casa Rural and bring the guests flocking… and she bought it!

Disaster. It was only then that I found out that Galicia isn’t the best catered for area of Spain when it comes to golf courses, an industry somewhat in it’s infancy in the north, still seeking the strong financial backing which has turned the whole of the south of Spain into one big golfers paradise.  Meeting the criteria was going to be tough, especially when other priorities (such as space, land, closeness to the coast, ‘peace and tranquility’ and price) were of a higher priority.

When we decided to purchase the house in Liñeiras I did do a quick check for nearby courses and despite their scarcity the meeting of the rest of the criteria swung the deal in the houses favour.

As an aide-memoir, as much for myself as for our future guests, I give a brief tour of the nearest courses here; 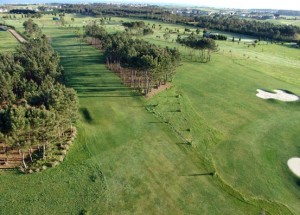 What will be classed as my local!

This is our nearest course, an eleven holer up (two new holes added recently) on the coast just the other side of Ribadeo, and over the border in Asturias. Seven of the holes are played twice and it is a par 70 measuring 5,425 metres. From the photographs it looks fine, very playable, but despite my Tom-Tom sounding the Reveille every time we pass within a thousand metres of it, I’ve never had chance to stop and take a look (maybe I will on the November trip?).

I think that the fifty minutes estimated by Google is on the conservative side and I suspect that when I get to know the roads that it will be an ‘under 40’ minute trip.

A drive south, and round the Lugo ring road to the south-west and you’ll find Lugo Golf Club. I suspect that with a bit of local knowledge I’d be able to shave some time off the Google maps estimate but it is going to be an hours drive at the very least.

A nine hole golf course without its own website at the moment and therefore I am struggling to glean much information except that it is a parkland course with a par of 72 although it measures just over 5,700 metres from the competition tees.

The nearest eighteen hole course, just, and at 40 € a round during the week rising to 60 € at weekends it isn’t too bad by Spanish golf price standards. The course par is 72 and it is just under 5,800 metres long off the competition tees. It looks a nicely kept course cut into the hillside just off the motorway between A Coruña and Ferrol. 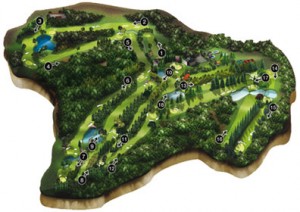 Looks tight between the trees

A gorgeous looking eighteen holer which will cost you 100 € a round during the week and 150 € at the weekend. Probably going to be a bit out of my league for membership, and just a little too far for a round twice a week.

For me it looks like I’ll be joining the first mentioned Cierro Grande, if they’ll have me and I have the time! I’ll then be keeping my fingers crossed that someone with plenty of money identifies the gulf between provision and potential demand around our house and decides to build a spectacular course on the rolling hillsides surrounding A Pontenova. Then I’ll be first in the queue with my membership cheque…wearing my silly jumper!

2 Responses to Meeting house criteria, the lure of the green