But what about the bulldozers?

I’d like to categorically state that I don’t read the Daily Mail. Never have, and never will. It’s print has never blackened my fingers, I’m a Guardian man. However, Amanda does occasionally glance at the online version which I guess is solely to get a heads-up of what the reactionary ultra-right are currently complaining about.

Articles like the one in this mornings online version about a hapless, law-breaking, ‘got just what they deserved to the indignant outcry of the anti-Spanish Daily Wail’, do make for interesting and somewhat alarming reading. Mr & Mrs Hartshorn, owners of a soon-to-be pile of rubble near Marbella have been given a massive fine, sentenced to eight months each in prison, and are facing the destructive force of the Spanish bulldozers.

When we’ve mentioned our Galician property to people, many have raised eyebrows and mentioned the demolition craze currently sweeping the southern Costas. We try and put their minds at rest, while maintaining a healthy concern ourselves, that things in Galicia are very different and that we are following the rules to make sure that we don’t find ourselves facing a hefty fine or the prospect of ‘porridge’.

Back to the hapless Mr & Mrs Hartshorn. There is no excuse for what they have done, they have plainly and simply broken the law and ridden roughshod over the Spanish planning process, probably encouraged by unscrupulous developers and their equally blasé ex-pat neighbours. They bought a piece of land with a very small building on it and when their planning application to build a massive sprawling villa was turned down, they went ahead and built it anyway. Following this course of events in England, or for that matter any first or second world country in the world, would prompt a similar course of action from the authorities.

The Hartshorns case seems clear cut but there are many others who find themselves in such a situation who do deserve more sympathy. These are people who developed properties with the correct paperwork in place but who were later told that their permissions should not have been granted. While brown envelopes full of cash may well have oiled the wheels of bureaucracy, those ex-pats caught up in the development trap were simply playing the game that was necessary at the time to realise their dreams. In these cases it is the corrupt and corrupting officials who should pay the cost not the victims who should lose their houses. 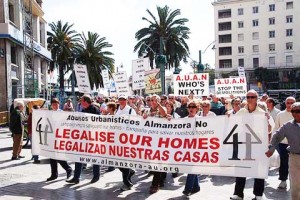 Are we immune in our little Galician haven? Probably not.

We are aware that our house is on agricultural land and we have to get permission for the renovations from the relevant government department. We are planning a tourism use and have to get tourism approval before starting too. We also know that current planning law only allows us to extend the existing building footprints by a maximum of 10% and we’re making sure that we stick within these limits. And we’ve employed an architect who knows the local planning law inside out and she is making sure our plans conform.

Despite this we are still being encouraged by many people to ‘get on with it’ before we get the relevant approvals/licenses/permission as no-one will complain or mind. It would be so easy to take this often well-meant but ill-placed advice and bring our plans forward. But, call it dragging our feet, call it being cautious, we are making sure that we don’t fall foul of the authorities.

This entry was posted in Current Affairs, Local Life and tagged Renovation. Bookmark the permalink.