Stumbling over the marathon start line

It happened just a few days short of seven months since we had sat nervously in the smoky Notaries office and heard her speed talk through what we were buying, before we handed over most of our life savings and took delivery of the symbolic key for 13 Liñeiras. Ever since then it feels like we’ve been limbering up for the big race, taking on fluids, and occasionally stretching our Lycra covered muscles. But for almost seven long months we’ve not even managed to get over the start line on our mammoth renovation marathon.

But last week all that changed. Our architect, the one we cannot name, submitted our plans for ‘Obras Menores’ (minor works) on the small house and the horreo. We’ve applied for these licenses to allow us ‘repair’ the roofs of these two structures and to make them watertight. This work also includes lining the roof of the small house with chestnut and installing insulation and a weatherproof membrane in readiness for later conversion to a house.

The application takes the form of plans, pages of words in Castilian and Gallego and an estimate from a local builder of the likely costs. If granted, and there shouldn’t be a problem (everything crossed and wood touched), then we will pay taxes equivalent to 3% of the quoted price. This would then allow us to begin work.

Should we find, on attempting the repair, that new slates and some timbers are required then we are allowed to also do this under the ‘Obras Menores’ license. Should this be the case then we have asked our builder to use a beautiful irregular slate pattern, and to create the ridge using traditional interlocking tiles just like out friend Pepe has done at his peaceful little hamlet of self-catering houses at Teixois, just over the border near Taramundi. 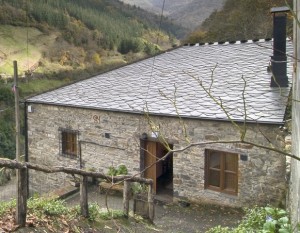 A ridge formed in this way is reputed to be more watertight than traditional ridge tiles and it certainly looks much better and will replicate the current style of roof on our house. It is a little bit more expensive, according to our builder, but we think it is worth it.

The application is now on its way to the Galician Xunta and should, in the opinion of our architect take a couple of months. In the meantime we are now soliciting quotations to make the repairs with a view to commissioning the work as soon as we get the nod.

The architect is also putting the finishing touches to the application for the conversion of the small house into a studio, and this application will also hopefully be making its way to the Xunta before the month is out. This one could take a while longer for approval, possibly up to nine months, as it is for a major works project.  We can also start to get some quotations for this work and possibly start some of the preparatory work which does not need permission, enabling us to hit the ground running next autumn. 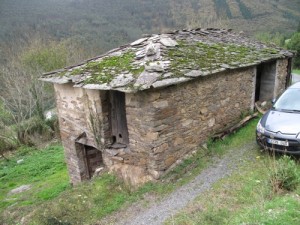 Little house as it stands

An added complexity is the roof of the main house, which showed some signs of further deterioration when we visited at the start of January. The recommendation, admittedly from builders with a vested interest, is that we look at getting it replaced sooner rather than later. This, however, is an ‘Obras Mayores’ (major works) and will require full permission.

It looks like our architect may be rather busy over the coming weeks!

This entry was posted in Background, The House in Liñeiras. Bookmark the permalink.

2 Responses to Stumbling over the marathon start line