Ribadeo, our gateway to the coast

As we await a couple of pieces of important news about the house, which I will of course share with you in due course, I thought I’d blog about Ribadeo.

Although mentioned previously in passing, I’ve not focused on our nearest coastal town.

Sitting at the north-east extreme of Galicia, the province of Lugo, and the area of A Mariña Oriental it is the hub of the local area and in the 2006 census it had a population of just under 10,000.  Slap bang on the coast it is thirty minutes from our house and the gateway to at least half a dozen delightful beaches and coves as well as having a number of good restaurants, and a couple of big supermarkets as well as many specialist shops.

The main square sits in front of the town hall and while small, it is pleasant enough with trees, grassed areas and a small children’s play park and surrounded by building acts as a summer sun trap. It’s also on the pilgrim route (Northern Route) so the ‘scallop shells’ can be followed, for a short distance at least. 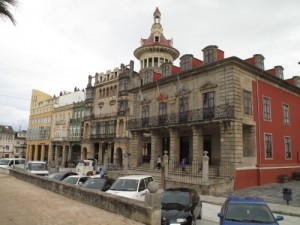 Right in front of the town hall is a bust which was donated by the people of Montevideo (Uruguay) in 1957 to celebrate the centenary of the birth of renowned author and poet ‘El Viejo Pancho’ (José Alonso y Trelles) who was born in Ribadeo (although some contest he was born just over the Asturian border in Castropol, Asturias) before emigrating to South America at the age of seventeen. 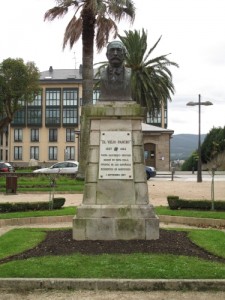 Ribadeo has an association with the world famous Sargadelos ceramics. The founder, Antonio Raimundo Ibáñez (Marqués de Sargadelos), used Ribadeo as his main port for exporting from the manufacturing base in Cervo, Lugo (50km along the coast towards A Coruña).  A nice little story until you learn the macabre fact that during the Spanish War of Independence (in 1809) Ibáñez, unfairly accused of collaborating with the French enemy, was assassinated by being dragged through Ribadeo’s streets behind two horses.

The town has two museums (the San Damián Fort and Casa da Ría, Nature Centre) and nine monuments as well as a pretty little marina where hundreds of white pleasure craft bob about on the Atlantic Ocean.

But saving the best until last, Ribadeo also has a number of good restaurants to tickle your taste buds. The best of these, despite its appearance, always has a queue for tables and serves a selection of freshly caught and traditionally cooked seafood. 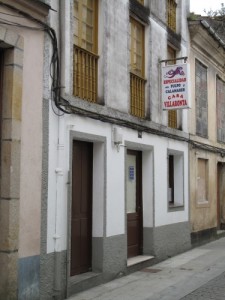 We ate here with Ramon the night before we finally bought our house, and the pulpo (octopus) and chipirones (squid) were exquisite and washed down with local white wine served in small ceramic bowls from a ceramic pitcher (you’re right, they could have been serving us anything).

This entry was posted in Food & Drink, Local Life, Places to Visit and tagged Galicia, Pilgrims, Ribadeo. Bookmark the permalink.