Northern Spain is not just for summer

Popular rumour would have you believe that northern Spain is only fit for visiting from the start of July until the middle of September. Those expounding this tattle would suggest that outside the Galician summer it is wet, windy and closed, just like Whitby on soggy November Wednesday. However, if our visit from the 12th to 15th January is anything to go by, the winter is the perfect time to avoid the crowds and more-or-less have the place to yourselves.

The first benefit which we gained from such an unseasonal visit, apart from a pretty empty EasyJet flight with plenty of room to spread out, was a big bonus at the Atesa car hire desk. We’d booked a ‘compact two-door a/c’ expecting the usual Seat Ibiza or Citroen C2 but for just £17 a day (all inclusive) we were given the keys to an upgraded Citroen C4 Picasso (which should have been £50 a day)…. one with iPhone music and phone bluetooth connection…. and everything! Climbing aboard this big bus I instantly knew it was going to be a good few days. 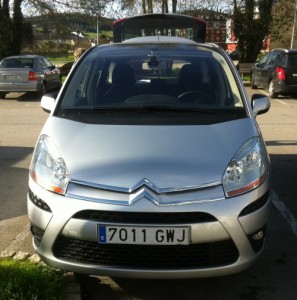 The sun was shining, the temperatures pushing twenty degrees centigrade, and the roads were traffic free. House business took up our Wednesday and Thursday, but on friday we hit the tourist trail and headed for a night in Gijon (pronounced Hi-Hon as though you are clearing your throat at the start of each syllable). We were booked into the Silken Hotel Ciudad Gijon at 60€ per night for the room, a modern hotel (opened 2006) which is a pleasant 10 minute walk from the old town.

Gijon is the second city in Asturias although its inhabitants feel as though they should be the capital, ahead of Oviedo. As Gijon is on the coast, those living in Oviedo often refer to it as ‘our port’ further riling the Gijonese. But don’t be so quick to dismiss it.

Although it is a largely industrial area the new and old town are very clean and very pleasant and there are two massive beaches which sported surfers and swimmers, even in the middle of January. I didn’t trouble my toes with the sand, let alone the crashing and bubbling Atlantic Ocean.

On friday evening we found a brilliant sidreria in the old town (the area called Cimadevilla) which is the settlement between two beaches on the peninsula. Originally a roman settlement it contains nice squares, old buildings and narrow streets. At its heart is Plaza Mayor where, in one corner, you can find El Centenario (The Centenary), the chosen target of our high gastronomic expectations. 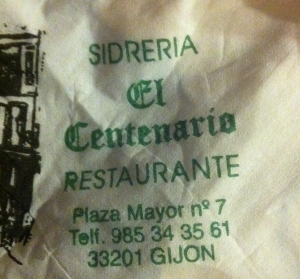 After waiting half an hour in what can only be described as a rugby scrum for a table we got one sat right on the side of Plaza Mayor watching the world go by and ordered sidra (which turned out to be even more like paint-stripper than that I’d had in Oviedo) and tapas. It was approaching midnight, we were in shirt-sleeves (well I was, Amanda had her coat on as usual) and all was well with the world as some of the best tapas that we’ve had arrived to tickle our taste buds.

We’d ordered, the ubiquitous chipirones (fried baby squid), mejillones con ajo(mussels with garlic) and a sensational plate of navajas a la plancha (razor clams). All three dishes were fabulous, washed down with cider (poured from a great height) and followed by a plate of Asturian goats cheese (not pictured here as the cider had taken effect and I forgot). 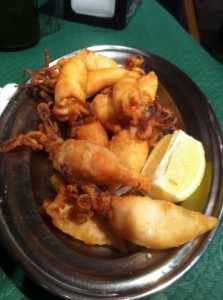 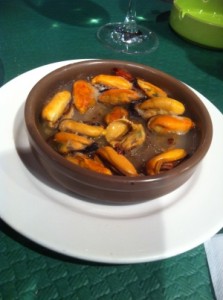 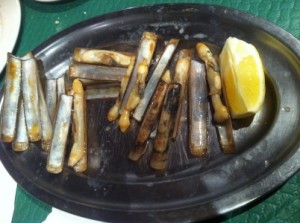 Northern Spain is therefore not just for summer. It is an experience that changes with the seasons and which can be enjoyed all year round.