How service stations should be

The route from Asturias airport to Ribadeo/Castropol, from where it is another 40km onwards to our house, will soon be two lanes of gently undulating and predominantly empty tarmac. The European Community has part (mostly) funded the Autovía del Cantábrico (A-8) and with the exception of a few more mountains that need tunnelling, and valleys that need spanning, it covers the majority of our north coast route from the airport until we turn inland.

There is visible progress on the autovia, despite numerous downing of tool in disagreements between the contractors and government, and although the current financial climate means that cash is tight the work on our section is scheduled for completion by the end of 2012. Once complete the motorway will cut our one hour and forty-five minute journey down to just an hour and a quarter as we cruise at 120km for an hour for the first 90km of the journey, leaving a 40km cross-country run to  Liñeiras.

As always progress comes at a cost.

The cost of our reduced journey time is that we will now no longer automatically pass by the doorstep of Hotel Rio Mayor positioned perfectly to catch the hungry and thirsty traveller, as it will be on the E70 Caraterra del Cantábrico a newly formed backwater away from the hustle and bustle of the new modern thoroughfare.

And it is a most unusual gem that we’ll be missing from the end of next year, unusual as it has a garden with a boat in it, despite being one kilometre from the sea! 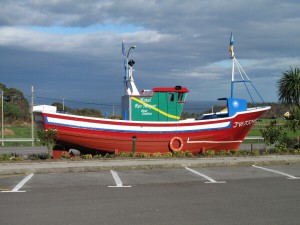 A garden with a boat

After driving past it on every trip to the house we finally decided to stop there when we visited in January. Pulling off the main road we could have been forgiven for thinking that it was closed as only one other car was in a large tarmac car park. Despite it being almost 2pm the place was deserted and we thought about turning around and heading straight off, but this would have been a mistake. 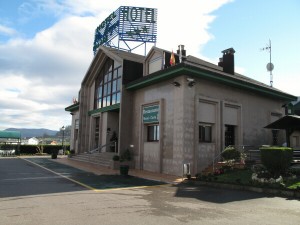 Hotel with bar in the entrance

As Spanish ‘service stations’ go, it is a large complex. A decent sized hotel is the main feature but to the side it has a fifty+ table, waiter serviced, restaurant along with a separate grill/barbecue area, gift shop (closed), and children’s play area.

The restaurant offered a perfectly adequate ‘menú del dia’ for 10€ which went to three courses, bread and a drink which included the ubiquitous bottle of half decent house wine. Despite being first in we’d started a trend and within ten minutes half a dozen of the tables had people seated and picking their choice from the daily three. 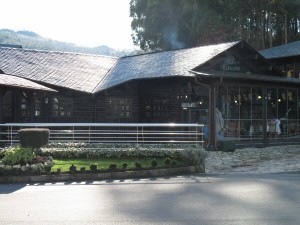 Service was prompt, food plentiful and service delivered with a courteous smile. Within an hour we were on our way, refreshed and topped up for the remainder of the journey back to blighty.

This is the way that service stations should be, although sadly this is likely to be one establishment which won’t withstand being deserted by passing traffic as people keep their heads down on their speedy slog along the new autovia.

This entry was posted in Food & Drink, Local Life, Places to Visit and tagged Asturias, Roads. Bookmark the permalink.

1 Response to How service stations should be