The town with the wrong name

One fateful night last December saw bitter division and outright controversy, bordering on rebellion, in the nearest town to our house. The locals were up in arms, outraged and shocked as the community was plunged into crisis.

To put it simply, someone removed our bridge and gave us a new one!

‘So what?’, you might say. Surely that is a good thing? A nice new strong bridge? But no, it is a local disaster.

Up until 1950 Pontenova didn’t exist. Prior to this time the area had been split into three administrative districts; Conforto, Miranda and Vilameá. In 1945 the boundaries changed and Vilaoudriz and Vilameá were formed. Then in 1950 came the important building of a new bridge to join two communities across the river Eo (río Eo), and Puente Nuevo (New Bridge in Spanish) was founded much to the pride of its citizens as they indeed did have a ‘New Bridge’.

In 1963 these two councils merged to give Ponte Nova-Vilaoudriz and finally on the 9th June 1979 the whole area became A Pontenova (New Bridge in Gallego), a single administrative area. 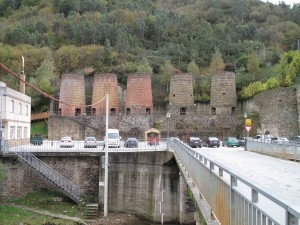 The sparkly new bridge was in the centre of town, right next to the Concello building and opposite the landmark furnaces. It served the community for sixty years and then, one wet night in early December, some men came along and took it away as bystanders stood and wept.

So A Pontenova, named proudly after it’s new bridge, now has a newer bridge. This one is 400m upstream, has two lanes, a nice safe pavement and should stop the build up of traffic trying to turn in the centre of town. But the locals still aren’t happy.

Perhaps another name change is in order to ‘A Pontenovanova’.

STOP PRESS – It now looks like we are getting another new bridge to replace the old new bridge. I do hope that everyone is keeping up! – STOP PRESS

This entry was posted in Current Affairs, Local Life and tagged Galicia, Pontenova. Bookmark the permalink.

1 Response to The town with the wrong name