The welcome return of Enrique

Ever since I bought Enrique two kilos of finest apples at the Feria in Meira he’d been missing from our finca. The big bag of apples spent some time in the Landy, more time hung in their bag from an impromptu hook in the horno, and when I had finally given up hope of seeing the donkey again I handed to full bag to Carlos’s mother insisting that they were for the donkey, but resigned to the assumption that they would end up in Carlos’s packing up for the next couple of weeks.

The frustrating thing was that every day I could hear him with his occasional ear-shattering braying which had earned him his name. Perhaps I was being punished by Carlos for having electrocuted his donkey through the unexpected combination of an apple and an electric fence. Or perhaps Carlos had just used his animal for some menial task and forgotten to return him to his pasture on my land.

I’ll admit it, I’d gone from not wanting his donkey on my finca to wondering why my finca had been shunned in such a way.

But now he’s back.

On Thursday Carlos finally got around to chopping up the remains of what used to be his garage (on our land) which the builders had demolished to rebuild a bulging wall. He’d asked me nicely if he could take the wood for burning and I’d agreed, mainly because it meant one less job for me sorting out the ‘jenga‘ that was the result of a hurried demolition. 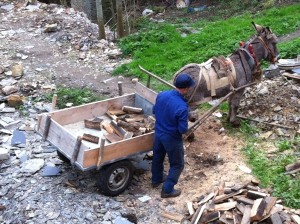 Having created a big pile of wood the only option was to fetch Enrique from wherever he was being hidden, attach the cart, and use donkey power to take the wood back up the steep road to the house that he shares with his Mum.

Transport complete the cart had to come back to our other garage, the one still standing at the other end of the property, and in which Carlos now parks his car and keeps his donkey cart. As a result Enrique was back out to pasture on my Finca, the status quo has returned.

Now I just feel guilty that I don’t have any more apples, and frustrated in my suspicion that they never made it as far as Enrique!