The most famous street in Oviedo is called Gascona. Not a particularly long, elegant, or architecturally pleasing, its claim to fame is that it is the Asturian capital cities centre of cider drinking.

A shallow sloping, marble surfaced, pedestrian way lined with small tapas bars serving the Asturian regional drink ‘Sidra’ from green 70cl bottles to locals and tourists alike. It is a ‘don’t miss’ on anyones travels around Galicia and Asturias. 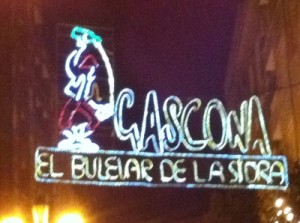 Most famous street in Oviedo

Going out for a cider in Asturias is like going to the theatre elsewhere in the world. It is not so much having a drink, as watching skilled craftsmen, and rank amateurs at work. Let me explain.

On arrival at a bar, and you apparently should visit many over the evening, you take your seat and nod to your waiter who will bring over a bottle of the 6% proof fermented apple drink and place it on your table. You admire it, without touching, for a minute or two and then he arrives with a tumbler and asks if you would like a drink from your bottle. You nod and the performance begins. 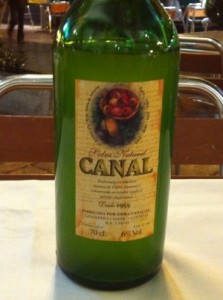 One of many varieties

The waiter picks up your tumbler and stares straight into your eyes, not averting his gaze for the duration of what is about to follow. He then positions your tumbler in his groin, full extending his left arm downwards. Then he takes the bottle in his right hand and extends his arm above his head before pouring a little from the bottle to get his bearings, trickling the sweet apple alcohol until he finds the rim of the glass. Once he is oriented, he increases the flow until there is a couple of inches of cloudy, and now aerated, cider in the bottom of your glass which he then hands to you while slamming the bottle back on the table in a crescendo of self praise. You drink the fruits of his acrobatic liquid dispensing in one gulp before tipping the dregs onto an already sticky sweet marble floor and returning your glass to the table. A few minutes later the whole process begins again, and so on until the bottle is empty and you order another or move on to the next bar.

Despite the sidra being served up being a decent 6% proof this is not the easiest way to get yourself rapidly intoxicated. For all but the most experienced of waiters the majority of your beverage ends up on the floor, their shoes, or down the front of their trousers. At the end of the night the street is awash with sticky cider and I can imagine that in the summer months drinkers must be plagued by the wasps that so favour the Asturian apples in their natural state.

Added to the smell and sticky state of your lower garments is the sad revelation that the cider is absolutely awful. Forget your Bulmer, Kopperberg, Magners and Strongbow, this is nothing like you’ve ever tasted.

Just to be 100% sure that it was all as bad everywhere we moved to another bar where I sampled a brew from a different cider house. It was just as bad…and look what it had done to the base of the pillar next to our table. 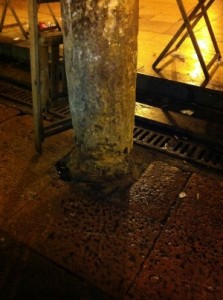 You have been warned…but it is worth the experience.