Oviedo is the capital city of Asturias, founded in the eighth century, and the birthplace of formula one racing driver Fernando Alonso and Carmen Polo, the wife of Spanish dictator General Franco. It is located some 50km south of the airport which often bears its name (actually Aeropuerto de Asturias) and which gets daily summer flights from London Stansted, 195km from the ferry port at Santander, and 177 km from our house in Liñeiras. We visited on our last trip spending a night at the Silken Monumental Naranco and were enchanted by everything that this city has to offer, except perhaps its vinegar cider. 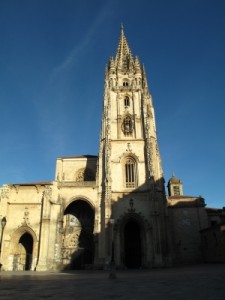 The Catedral Metropolitana Basílica de San Salvador is located at the heart of the old town and an important stopping off point along the pilgrim route to Santiago de Compostela. The cathedral is a real mish-mash of architectural styles and it backs on to the monastery of St. Vincent (home to the archaeological museum of Asturias) to form a large and impressive complex.

During the Spanish Civil War the city was the location of a famous seige when Colonel Antonio Aranda Mata held out for the Nationalists against the rebellion for just under three months before being relieved by Francos army.

The old and new parts of the city have many sculptures by varied artists including a life sized bronze sculpture of Woody Allen , one of the finest comedy actors and directors of all time, who once said  ‘Oviedo is delicious, exotic, beautiful, clean, pleasant, peaceful, and kind to pedestrians. It’s as if it doesn’t belong to this world, as if it could not possibly exist … Oviedo is like a fairy tale.’ Oviedo featured in the recent Allen directed movie  ‘Vicky Cristina Barcelona’.

The city itself has all the bars, shops, hotels, sculptures and cultural attractions to fill several days soaking in the atmosphere, admiring the sculptures and walking through the parks and meticulously kept streets. 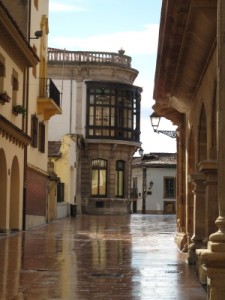 Fresh from a good street cleanse 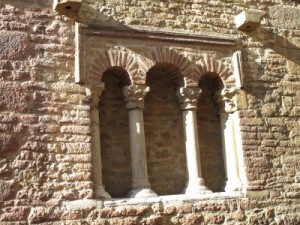 Of course it does have its curiosities, as does every Spanish city, and around every corner is something to remind you of which quirky country you are in.

Finally a photograph that it was impossible to resist taking (if only to ‘cock a snoop’ at our English pandering to environmental health). If the punchline wasn’t so obvious I’d use it for a caption competition. 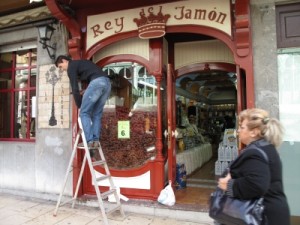 This entry was posted in Local Life, Places to Visit and tagged Asturias, Camino, Cathedral, medieval, Oviedo. Bookmark the permalink.

1 Response to An Asturian jewel