I did manage a long conversation with whistling Roma about his impending 4,500 km and fifty hour journey from A Pontenova to Donets'ka Oblast, in a fifteen year old Peugeot 205. As a non-native Spanish speaker he is pretty easy for me to communicate with as our restricted dictionaries have many points of confluence. I did try and reason with him about flying, but it seems that he'll be loaded down with contraband of some description, which sounds as though it will make the gruelling journey financially worthwhile. 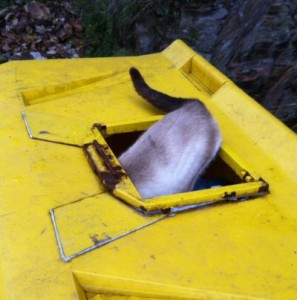 While at the house I managed to get an incriminating photograph of Miro and Elenas 'scummy' cat who at first glance seems very respectable, well groomed, and although curious, not exactly friendly. But his classy demenour hides a far darker side. For when he thinks that no-one is looking he turns into a filthy 'dumpster diver'.

He won't be allowed in our house when it has its doors and windows!

After a couple of Portsmouth/Santander ferries were cancelled over the weekend I've been keeping an eye on the latest status on the internet. I even 'live chatted' to a nice lady at Brittainy Ferries yesterday and it looks as though I'll be okay for my departure on Thursday teatime.

The forecast for the Bay of Biscay is for 6m waves and a 6m swell, which both sound as though they could be quite entertaining. Last weekends sailings were cancelled with 7m waves and swell, so it sounds like we're still borderline. 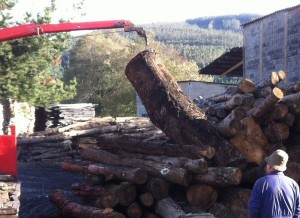 I have polished it with a lovely tin of beeswax which Stephen and Kay so generously gave me when I crashed their beautiful (rental) house in Trabada on the premise of delivering a Christmas card, but then also managing to wangle a superb dinner. They had previously got the wax to treat their newly laid wooden floors but had a change of plans, and after I'd mentioned my dilemma about various different beeswax recipies, and how to cook them, they offered me a tin.

It's done a great job and brought the wood up perfectly, I think I just need a bit more elbow grease to get it from a dull gloss to a high gloss finish, but that can happen once it is in situ.