Although the Galician dream is only a few years old, it has now allowed me to fulfil a dream which I have held since I was a spotty teenager. As a child and young teenager there were always three cars that I wanted to own. These weren’t cars that my Dad ever owned, they weren’t cars that I’d ever been inside, but they were my ‘poster cars’ that adorned my bedroom wall and filled the pre-pubescent dreams of a driver wannabee.

Car One – a Ford Transit. Multi-purpose, big roof for CB aerials, plenty of space for stereo equipment and room for a party in the back. Then I drove loads of them, up and down the country, on a regular basis for work, and the novelty soon wore off.

Car Two – a BMW. I didn’t care about the model, or the engine size, or the colour. I just had an irrational desire to have that blue & white roundel on the steering wheel in front of me. I am currently on my 12th, in ninteen years, and have never been disappointed. They really are the ultimate driving machine, nothing compares.

Car Three – A Landrover Defender. The ultimate utalitarian vehicle, beloved of the working class and royalty alike. The ‘go anywhere’, ‘do anything’ utility vehicle. A proper 4×4, and the best by far. And I think you know what is coming next…. On saturday, the long suffering, Amanda accompanied me to north Nottinghamshire to collect my new chariot, bought especially for my impending trip to Galicia. I’d bid for, and won, the blue 1986 Landrover Defender 90 pick-up on e-bay on the strength of five photographs, and three e-mails with the seller. I never expected to win the auction.

I’d put in a speculative low bid and almost forgotten about it, but at 5pm on the 19th September (my birthday) I got an e-mail from e-bay and I’d treated myself to a ‘landy’, the car of my dreams, almost twenty-five years to the day after I passed my driving test. She’s also twenty-five years old but has covered just 90,000 miles, and I have all the past MoT’s to prove it. She worked on a farm for the first twenty years of her life, at the beck-and-call of a pig farmer, (don’t tell Carlos or he may get ideas) and only did 3k per annum. The three owners since then have put a few more miles on, but really she’s still only just run in. 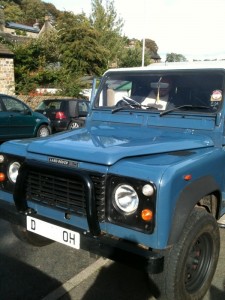 But I love it. My childhood illusions remain intact, all I am wondering now is ‘why did it take me such a bloody long time to buy one!’. We’re going to have a great time together in Spain!