An IQ test for travellers

I’ve been spending a lot of time in airports recently, and I fear that it is starting to drive me mad.

In these times of global economic meltdown we’ve been forced to seek work overseas. It has fallen to me to work on occasional contracts in Belfast and Dublin ,which require early morning flights from Manchester or Liverpool.

Possibly because it is summer, with the great unwashed heading for their fortnight all-inclusive break in Benidorm (£199.00 at all good bucket travel agencies), possibly because I have a day of hard work stretching out ahead of me, and possibly because I am not flying to Galicia…I seem to find myself increasingly intollerent of my fellow man. 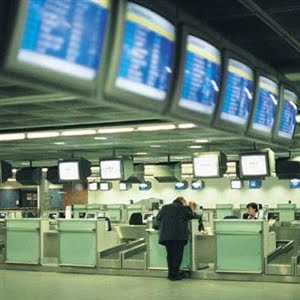 What is it about airports which renders a large percentage of the British public deaf, dumb, and blind?

Over the past few months I’ve developed many pet airport hates, none of which are theraputic for my hypertension. I have several questions will serve to indicate my key gripes;

These things serve to cost me hours of my life which I am never going to get back.

In the interests of the sanity of those of us who ‘get’ airplane travel, I think that there needs to be an IQ test before people are allowed to book flights, or step foot on the grounds of an airport.

The next time you are in an airport and you see someone with steam coming out of their ears, red-faced, and tapping the floor with their foot, while issuing expletives under their breath, it’s probably me about to board a business flight! I am beginning to understand why people develop flying phobias, it’s not the planes, it’s the time you have to lose due to others incompetence while in the airports.

All this said, I rarely feel the stress and strains of air travel when heading to and from Galicia. On those occasions I am chilled, looking forward to the journey and anticipating our arrival. The incompetence of others can be eradicated with a shrug of the shoulders and a shake of the head. Perhaps it’s the calming influence of Galicia.

And I’m flying again on Thursday, to Dublin – what joy!

1 Response to An IQ test for travellers