Two motorbikes and a funeral

Rather than spend the entire morning stood around watching Facundo and his men continue their speedy renovation of our barn, on saturday I opted to start work on one of the many wars I’d planned for my own personal battle with the big house.

The arrangement of the rooms is such that it is possible to secure four of them by fitting locks to two doors, giving me somewhere secure to stash my tools, and also to ensure that no poor unsuspecting soul accidentally falls through one of the fifty percent of floorboards whose maximum load bearing is that of one of the many mice that have made our house their home.

Hasps and padlocks fitted, the next task on the list was to clear out the decades of long forgotten trash that had been accumulated by the previous owners. It should have been an easy task, especially as one of the fuller rooms is totally inaccessible for anyone but Indiana Jones due to its lack of floor.

I quickly reduced my expectations to clearing two of the four rooms.

In the first was a large chestnut wardrobe, so sturdy it felt like the house had been built around it. It was beyond repair so I opted for the ‘small pieces make easier carrying’ approach, but the claw hammer, and then a lump hammer made little impression.  In the end it took a sledge hammer for me to win the battle, although each of the dozen pieces that I eventually smashed it into, were each almost too heavy to carry outside. 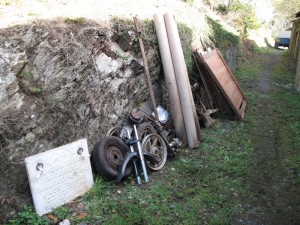 The start of my scrap yard

A second wardrobe put up less resistance and then the interesting finds started. A motorike engine, handlebars, wheels, and then another engine, all for my scrap metal pile (oh how I wish the steel hungry gypsies in the white van were in Galicia rather than Yorkshire). I found a couple of old paper plans which bore no resemblance to the location of the house, x-rays of a foot and a chest of some long since deceased inhabitant, and the jewel in the crown, a tombstone. 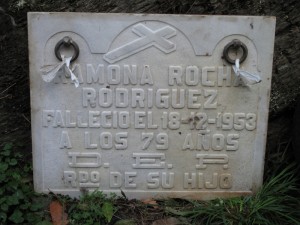 I am guessing that the lady of the house died before her husband, and was placed in one of those cubby holes in the local cemetery. When he died they incarcerated him in the same cubby hole and got a new memorial carved bearing both their names. This one was then superfluous.

Still, it’s a bit creepy and it was quite a shock when I found it. Perfect for a Halloween blog though!

1 Response to Two motorbikes and a funeral