Our third visit – part one – the verge of a great discovery

There had been a fair amount of time spend feeling a little bit down after the January O Paramo ‘near miss’. The negative time was spent thinking ‘we’ll never find anywhere suitable that we can afford’, while in moments of positivity the thoughts were ‘ there are over one and a half million houses in Galicia, ours is just waiting for us to find it’.

As the March trip approached the mood in our household became more upbeat. It felt like we were ‘going home’.

We’d arranged to meet Natalia and John again (Galicia Holiday and Galicia Vista respectively) to see a couple more properties with each, and after almost meeting up on our second visit in January we were to be shown a couple of houses by Gonzalo from  Galicia Dreams. The flight arrangements meant that we had a day and a half free so with some further scouring of the internet we stumbled upon Spanish Country Cottages. Based in Wales, but originally from Madrid, Ramon had some interesting looking properties in the Turia Valley, and although it was a bit too far east for us, we decided that it would be worthwhile using our spare day and meeting up (see part 2).

The houses that we saw with Natalia were in the south of Galicia on the Portuguese border around Tui and after lunching in a motorway service station (a far nicer and more leisurely experience than a burger and fries at Watford Gap) we ventured out in torrential rain to look at three properties. The rain was so heavy that I kept the camera in the car for fear of drowning it. A complex of five totally ruined buildings was of interest but on a craggy slope and with an access road running right through it. Driving around the area on the tail of Natalias’ Peugeot we both decided that we much preferred the more desolate coastal north, much more in keeping with the Yorkshire moorland where we currently reside.

A drive north and a wet night at the Parador in Villalba courtesy of budget hotel booking was followed by an early morning run, in glorious sunshine, up to Ourol and a meeting with Gonzalo, his partner Delores, and local agent Julio. 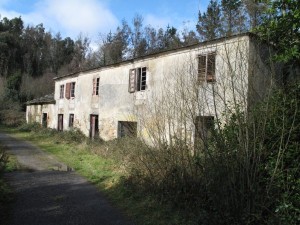 First up was a rendered house which was on the market for an amazing 68.000€ (£57,500). It was a nice house, with a lot of land (about 3 acres) but would have been a painful conversion into a Rural Hotel due to a very linear layout with one bedroom connected to the next and no corridor. It was just off a small track and quite close to a busier main road, but the main house was water tight and it had a certain something about it. The second offering was some distance away, the other side of As Pontes de García Rodríguez, so we set off on an hours follow-the-leader drive. This area is the industrial heartland of Galicia and the reaction of those we had told about the house here was not positive. We hoped to be convinced that the house was better than its postcode.

This was a property that we’d seen on the internet, and got excited about. 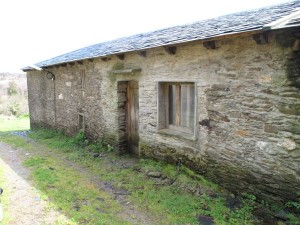 As Pontes, the main house

The house was at the end of a country lane, in the middle of nowhere and opened out onto more than seven acres of land. It had a brand new roof and was on the market for 72.000€ (£61,000). Inside was totally stripped, just waiting to be divided into rooms, but rough calculations by Gonzalo (an architect by trade) showed that the likelihood was that we’d get a maximum of four bedrooms, even with a small extension, and there would be nowhere else for us to renovate as our quarters. 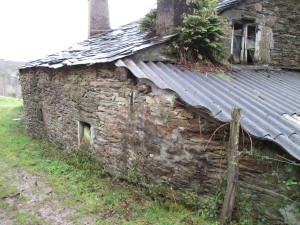 There was another large house attached and behind this property which was owned by the brother of the vendor, but which was not currently for sale. We’d need this additional house to make the property viable as a business, and to ensure total peace an quiet. What were already cool feet became arctic very quickly. 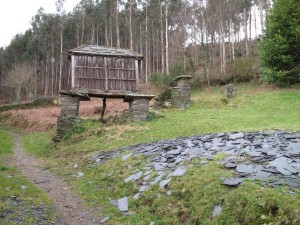 If you judge a property by its horreo, and some people do, then it was clear that this would be a non-starter as this was by far the most pathetic horreo that we’d seen. It is also a listed feature which means it can be renovated but not changed or removed.

Gonzalo had shown is two near misses and he was definitely on the right track. We said goodbye to Julio and followed Gonzalo and Delores to Viveiro where we ate a fantastic late lunch of Galician empanada, chipirones, some kind of fish pate with toast, and pulpo all washed down with local beer in a little restaurant off Plaza Mayor. We’d previously met Gonzalo for lunch in Santiago de Compostela on our first visit back in November and we got on with him very well. His partner Delores was also delighful, and we’d have dearly loved to get involved in a project with them, perhaps we still will?

We felt closer to finding a property now than we had done for a while and we were convinced that the coastal belt in the north of Galicia was the area where we wanted to settle. We felt that the following days trip to the Turia Valley  to meet Ramon would probably be a waste of time, but we were positive that the right house was just around the corner.

But not as close as it actually turned out to be.

This entry was posted in Background and tagged As Pontes, Food, Galicia, Ramon, Tui, Viveiro. Bookmark the permalink.