As promised, Dolores met me in Pontenova at nine o’clock this morning to assist me in trying to buy an angle grinder and a pipe terminator so that I can ensure that the donkeys water supply is re-connected, but that’s another story.

After a quick coffee we headed straight for the local hardware store (ferretería in Spanish which is a much better word). On arrival I wasn’t hopeful, it was the size of a corner shop but stacked high with everything a farmer could possibly want to buy.

The proprietor didn’t have the ‘pipe stop’ but the angle grinder request put a big grin on his face. From under the counter he produced out the smallest angle grinder you could imagine. It was though it had been thrown from a Christmas cracker and while I am sure it could manage a manicure, it wasn’t going to sort out my milking stalls. I shook my head and he disappeared.

The second ferretería in Pontenova was closed, not due to open until 9:55, which is the oddest opening time I have seen advertised on any shop door. In the end I settled for a ‘pipe stop’ from the plumbers which cost me 44 cents. 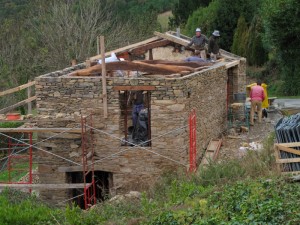 Two donated apple cores have caused the donkey to become my new friend. He now comes running when he sees me or the Land Rover and I feel gutted when I don’t have anything for him. After he was usurped from the barn by the building works Carlos has built him a new shelter under the old cabazo (grain store) out the back of the house, but it doesn’t look particularly sturdy or weatherproof. 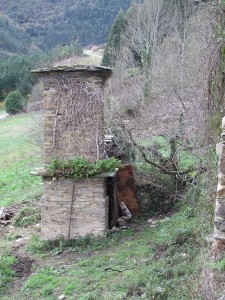 If I am going to end up buying him apples, I’ve decided that the donkey should have a name (the agreed policy is not to name things which Carlos intends to make into sausages). I have settled on Enrique (after Enrique Iglesias) as whenever he opens his mouth, he makes a god-awful noise that is impossible to listen to without pulling a face like you’ve been forced to suck a lemon. 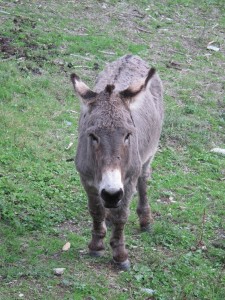