A case under the trade descriptions act

It’s six o’clock in the evening on Sunday and I feel shattered.

Friday night/Saturday morning seemed to go on forever. After a hard days graft I went to bed at a civilised 11:30pm and just as I was drifting off the racket started up.

I’d seen the bill posters around the area for the Fiesta de San Martin, a traditional end of harvest celebration which also signifies the slaughter of the family pig which has been fattened all summer, and an impromptu jobs fair for those who had been working the land and who were now looking for alternative employ for the long winter ahead. 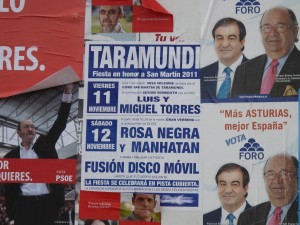 Quite an inaccurate poster

The noise, coming from the school yard about fifty paces away, carried on until around 4am and woke me several times from attempts at sleep as they ratcheted up the public address system volume another notch. After the music ended it took another two hours for the shouting an singing to die down, and two hours after that I was getting up to go to do some work at the house.

On the way back I took a closer look at the posters. Last night had been the pre-amble, the main party was happening tonight. I decided following the old adage of ‘if you can’t beat them, join them’ and an afternoon nap later I was ready for the main Fiesta.

The posters had suggested an evening start time of 10:30pm (around ‘party curfew time’ in the UK) but come 11:00pm the village was still silent save for the bustling pubs and restaurants. Just after 11:15 there were six very loud fireworks (bombas is the word for them in Spain, a far more accurate description), and then the band started up. I finished my beer and headed for the school yard.

What MANHATAN lacked in talent, they more that made up for in enthusiasm. A middle-aged boy-girl duo with gusto, cracking out Spanish ballads and love songs to an appreciative crowd of about fifty. Around twenty of the audience were under ten and having an impromptu game of soccer in front of the stage, and another ten of whom were over seventy and who were cuddling their other halves while shuffling around the playground.

I got another beer and waited for the main act, Rosa Negra, who I’d researched that afternoon and thought were worth a listen. But MANHATAN were going to give/get their moneys worth. At 1:15am they announced their last number, a sort of Spanish hokey-cokey, which saw me running for cover in a darkened corner and skillfully avoiding the demands for everyone to join in.

Then it was time for the headline act, and I was looking forward to it after listening to Rosa Negras album on Spotify that afternoon. But the two guys who got on stage looked nothing like the woman on the album cover, and when they started up they sounded nothing like the fusion of Portuguese, Asian and Arabic music to which I’d earlier been introduced.

Apparently there had been a late change. Instead of an attractive young lady with a haunting voice, Luis and Miguel Torres are two fifty something traditional Spaniards in black suits and black shirts and with brylcreemed back silver and black hair who belt out what can only be described as traditional Spanish songs with a 1970’s twist. I managed a song and a half before downing the rest of my beer and heading home.

Robbed of Rosa Negra I wondered if I could get my money back, before realising it hadn’t cost me a cent.

This entry was posted in Local Life and tagged Asturias, Fiesta, Taramundi. Bookmark the permalink.