I’ve always loved ‘Time Team‘ with the enthusiastic Tony Robinson, the sceptical Professor Aston, the argumentative romantic Phil Harding, and the upper class toff Guy de la Bédoyère (which has to be a name he either bought, or made up to get his Equity Card).

I loved the three days of archaeological panic packed into an hour, and the one really special artifact that they somehow manage to find on even the most unpromising of digs. But no more…I’m done with archaeology.

Today, while a skeleton staff of Angel and Pepe continued to work on the roof, I decided to make a start of clearing some of the detritus from the horno/bodega which I excitedly broke into last week. The idea was to clear the entrance to enable Amanda, my brother Ian and sister-in-law Karen (who all arrive on Friday for a fleeting visit) to gain access to view the bread oven.

After clearing away the overhanging ivy and brambles it was time to tackle the several feet of rubbish which had accumulated under the collapsed roof. A bit of domestic archaeology, peeling back the recent layers of dirt (starting with the collapsed roof tiles) to uncover the interesting artifacts contained within. And then I ran up against the same old problem which I have encountered elsewhere on site.

The previous owners of our house were either kleptomaniacs, or happy to live in their own filth. It seems that as soon as a room or building fell out of use they turned it into a makeshift skip, filled it, and then forgot about it. 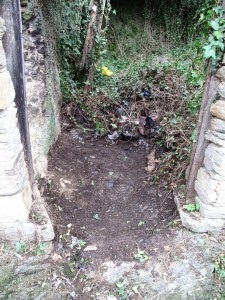 I cleared about a square metre in the entrance (only another 40 to go) and out of that one square metre I have made three big piles of items which should have been taken away to landfill on the day they ceased to be useful. 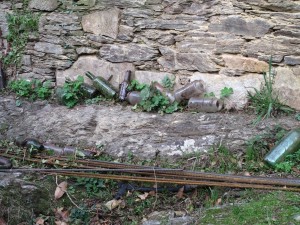 There were enough bottles to set up both a vineyard and a jam factory (all empty). 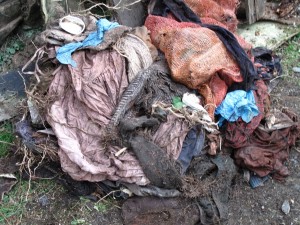 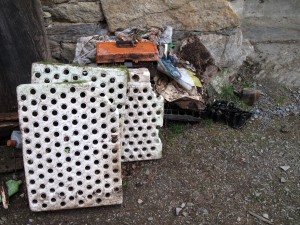 And enough plastics to help you to understand why ICI were such a successful firm in the 1970’s.

And then in dawned on me. Time Team is all about uncovering the rubbish which people threw into disused rooms and forgot about. Give our place another couple of hundred years and they’d love it. They’d be uncovering sauce jars, wine bottles, seed trays and flip-flops.  They make their living by scratching the surface of the redundant, discarded and unwanted.

The gloss has gone off the whole archaeology thing for me. No more Time Team…and just another 40 cubic metres of debris to go!