It has been a pretty normal day.

I overslept, took the skin off three knuckles in an ivy related incident, witnessed the installation of the roof membranes and batons, met with the architect who seems pretty happy, and electrocuted Carlos’s donkey – known to me as Enrique (see previous blog entry).

Pulling the shutters all the way down and then not setting my alarm is fatal. Fatal in that I didn’t wake up until almost ten o’clock, and then only because the first ‘loud haler’ car of the day came through Taramundi lasting out a message about Sunday’s parliamentary elections.

It was a mixture of drizzle and rain up at the house, so rather than dig through water laden mud, clothes, and goodness knows what else in the horno/bodega, I set about removing thirty years of ivy from its walls, perhaps a little too vigorously. When one particularly tough vine finally let go, my bare right hand (my gloves were in my pocket where they weren’t guarding anything) hit the opposing wall and I was without some of the skin I’d awoken with an hour earlier.

Quietly nursing my injury I decided to spend some time watching Angel, and a new previously unseen member of the team, cutting the hole in the roof for the chimney and then installing the membrane and batons ready to receive the roof slates, which Arturo has now spend two days hand cutting. 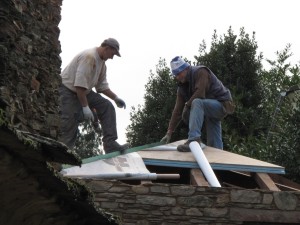 Lunch-time arrived quickly, thanks mostly to my tardiness in starting the day, and while the workers were whisked off for their cooked meal in Pontenova I retired to the Landrover for my empanada and fruit, and as a special treat I’d bought Enrique his very own apple.

My lunch finished I wandered over to Enrique, who has now learnt that it is worth his while to watch me eat lunch from the corner of our paddock. I gave him my apple core, while hiding a nice, whole, shiny red apple behind my back.

One he’d finished my leftovers I moved closer and offered the whole apple on an open hand. Unbeknownst to me I was resting my leg against Carlos’s electric fence and as Enrique leaned forwards to take the apple, the charge went from the fence, through my body, into the apple and gave Enrique quite a jolt to the end of his nose. He was far from happy, running off down the field, the apple still in my hand.

Is this what is known as ‘killing him with kindness’.

I think it’s going to take some time to re-build the confidence between us!