You may be surprised to know that it rains more in Galicia than it does in Manchester, Englands much maligned supposed capital city of precipitation. And I think that most of Galicias rain for 2011 fell within a two hour period this afternoon.

I’ve spent a lot of time in Manchester. I studied at University there, lived there when I started work in Salford, and have been a co-director of a company there for the last thirteen years. I know that it rains a lot. I was then, surprised to find that it averages just 806.6 millimetres (31.76 inches in old money) which is quite a way below the UK average of 1,250.0 millimetres (44.29 in).

In general Galicia gets much more, although it varies considerably geographically, with less rain falling both on the coast and further inland where the Atlantic Ocean has less effect. A Coruña, right on the coast gets an average of 1,008 millimetres (39.69 in) while Santiago de Compostela is perfectly placed to catch the precipitation caused as the warm air from the Atlantic is forced to rise into the hills. It can boast almost double Manchesters figure with 1,545 mm (60.8 in). By comparison Lugo, the nearest regional capital to our house in Liñeiras, gets 1,084 mm (42.7 in). This is why Galicia is a green and fertile land, the breadbasket of Spain, and when it comes to kiwi fruit, the fruitbasket of europe.

When I arrived at the house this morning, a little later than intended due towhat turned out to be an impossible quest that I’d set myself of buying a tuna empañada for my lunch, the site was bathed in brilliant sunshine. Angel was on the cabazo roof doing his stuff with slate, Alejandro repairing a collapsed wall which Amanda added to the work schedule last Saturday, and Vladimir cutting more roof tiles. I set to work in the horno/bodega and was soon without hard hat and in shirt sleeves as it was way too warm.

All was fine until just after lunch (about 3:30) when what started as fine drizzle gradually increased in intensity before the heavens opened. I started looking around the site and mentally calculating whether there was enough waste wood to build an ark, whether I’d have it completed in time to find two of each species of animal, and if there was enough time to get it afloat before we were all submerged. 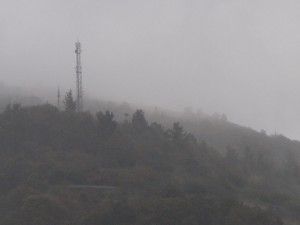 I put my tools back in the house, where the dozen or so internal showers were already in full stream, and retired to the ground floor of the barn where the other three workmen had decamped, deciding to abandon outdoor work for the day and start on the building of an internal ‘tanking’ wall on the ground floor. I looked with some pity on poor Vladimir who I knew would soon have to venture outside to mix cement.

I started a discussion with Angel about the weather. Apparently the forecast this morning had been good, and we were in for a good week weather wise. He blamed the unexpected rain on the new government (the Partido Popular) who were voted into power on Sunday, after seven years in opposition.

The Spanish conservatives have been in power for just under three days, during which time Angel has told me that they have been responsible for; his car radiator not holding enough water to keep his engine cool; his lunch today not been warm enough; too many roof slates breaking as he tries to nail them to the cabazo; and, the rain coming when not forecast.

I suspect he could be in for a miserable four years.

0 Responses to Time to build an ark