Discovering the purpose of nose hair

It’s finally dawned on me what nose hair is for, and believe me, it does have a use. I apologise in advance to the squeamish.

While in Galicia I have dispensed with the normal day-to-day regimen of gentlemen’s hair control. With Amanda back in England I’ve opted for an increasingly hirsute appearance and now sport a decent length half white – half black beard, a good growth of the ear hair which plagues 40+ year old blokes, and some nice straggling nose hairs (I did warn you!).

I’ve spent the day up at the house trying to save us a bit of money for phase II of the barn conversion by removing the plaster and old clay pointing from the internal walls ready for re-pointing, or in some cases for plastering and painting. It’s a hard and messy manual job and with the weather being too poor for roofing, I was there with just my iPod (on random shuffle) for company.

I was using a little hammer-like tool, whose name I don’t know, which resembles an ice-pick on one end and a horizontal axe at the other. It is designed specifically for this job and I saw the builders used it when raking out the joints between the stone on the outside of the barn. It looked easy enough to me so I invested in one at AKI (Lugo) a couple of weeks ago.

What you start with is a wall with 100 year old plaster on it (can anyone else see the shape of a fat rabbit walking on its hind feet in this picture? Or have I being drinking the 80 cents a bottle red wine for too long?). 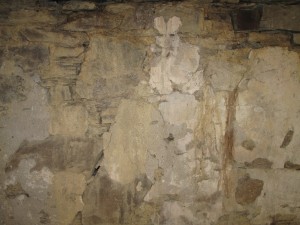 You then remove the plaster and rake out all the joints, extracting small stones as you go and making sure that there is enough space around each stone to get some mortar. This often involves smashing away at slate to remove touching surfaces. This is the result of several hours hard labour. 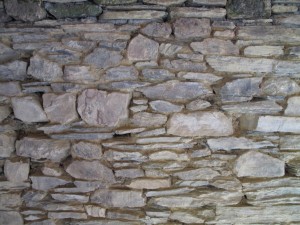 The fruits of my labours

Eventually I will step aside and let the experts do the pointing (mainly because I don’t have a cement mixer) so that it looks fantastic, a bit like this. 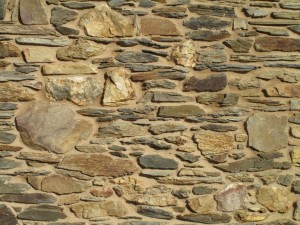 After the experts get pointing

Back to the nose hair. After a hard days work I dusted myself down and got back in the Landy. Checking the rear view mirror I noticed a fungus like growth in both nostrils. Alarmed I quickly went to remove the alien attached to my primary breathing apparatus, to find that my nose hair had formed a natural barrier to 100 year old plaster and clay pointing.

My forest of nose hair had done it’s job and protected my throat from all the nastiness. Perhaps tomorrow a respirator would be a better idea?