I’ve only ever bought windows for a house once before.

Back in ’98 when we bought our current house in Huddersfield, my memory is that it was a fairly simple process. We invited two reputable local companies around to give estimates, chose between white or brown PVC, then offered to pay 1/3rd of the price that they originally quoted. On that occasion the windows were manufactured and installed in pretty quick time, and we’ve not looked back since.

I thought it would be the same in Spain, but it appears that I was very wrong.

The last time we were in Galicia we took our specification to three window companies to get quotes for the windows (5) and doors (2) for the barn and were fairly explicit in our brief. They need to look traditional be; made from hard-wearing, low-maintenance iroco; be double glazed; secure with wrought iron fixtures; and, all with internally opening shutters. I’d measured everything up, taken photos of the openings, and thought I’d considered all that I would need to, but included my e-mail address just in case.

My mailbox has been filling up with questions ever since, most of which we are struggling to even understand.

There is also a big debate about how the windows should be secured, and this will vary depending on whether we want inward or outward opening windows. Although all the ones we’ve seen open inwards. 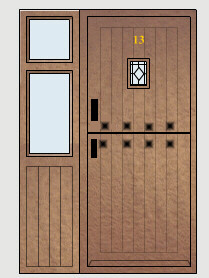 One of the openings is quite wide, almost two metres, and here we’ve specified a door to one side and windows to the other (as above, drawn with my rudimentary door design skills). This appears to have caused carpenter meltdown and seems to be something which none of the three have ever done before.

Another long night at the keyboard stretches out in-front of us as I try and explain what I mean in long-winded English and Amanda tries to translate it into carpenters Spanish, as we increasingly realise that we need to be out there to explain things properly.

3 Responses to Windows; it’s not clear