A room with a (new) view

Good news from Galicia. We’ve made a bit more progress on the barn, and we’re not even there to crack the whip.

On our last visit the architect told us that there was no problem in commissioning the replacement balcony under the planning permissions we already had. ‘Replacement balcony’ in that it would be a whole new balcony in place of the three rotten beams that had previously supported such a structure the last time that the upper floor of the balcony was inhabited, over 100 years ago.

This was a great relief to our carpenter José who, months ago, had prepared and installed the supporting beams, and was driving around with the chestnut planks, spindles, newels and handrails in the back of his van. Under the impression that we needed our ‘major works’ license we’d been stalling, and he’d been seriously out of pocket having bought and prepared all the timber without any cash up-front.

We met up with José at his shop in Meira, Carpintería Koté, to discuss getting a quotation for windows and doors, and you could see the look of relief on his face as we told him to go ahead and install the balcony, take and send some photos of it finished, and then send us his bill.

Here is what José sent over the weekend, and mighty pleased we are from the look of the photos. New, yet traditional. Small in keeping with the proportions of the barn, yet big enough to sit out on and drink a bottle of wine on a summers evening. He’s done a great job. 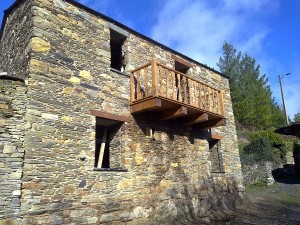 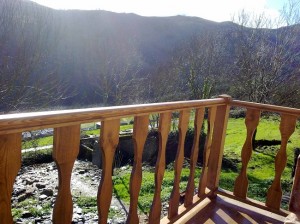 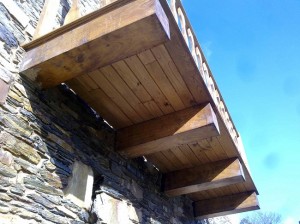 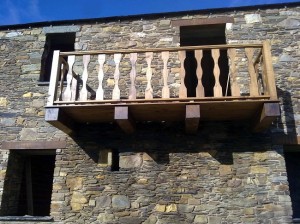 Almost a month after our return we’ve also started receiving quotes for other works, including; the completion of the barn, the conversion of bread oven house, and for the windows and doors. All we need now is that major works license (eleven months and counting since the application).

We’ve even been looking for wood burners for the barn and incredibly both agreed that we liked the same one that we saw in a showroom in Denby Dale, before we turned over the price tag and found it was the most expensive in the shop.

‘Champagne tastes on a beer budget’, I think that sums us up nicely.