Filled with culture and cuisine

Our last night in Galicia found us at a bit of a loose end but Neil and Rosa came to our rescue with the offer of a free concert in Ribadeo to celebrate the Galician ‘Day of Letters’, a local holiday for which the whole autonomous state had ground to a halt. The fact that the local holiday fell on a thursday meant that most people would also take the friday off, and make a decent long weekend out of it.

We didn’t know what to expect, but it was free, and with the promise of food afterwards there was no option but to give it a try. It turned out to be a forty piece wind orchestra who spend just over an hour guiding us through seven works of Galician importance while the young students in front of us in the audience played games on their mobile telephones, much the same the world over. 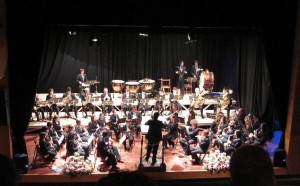 At the end we all stood for the Galician national anthem and those who knew the words, predominantly those whose place of birth was Galicia, joined in while we shuffled our feet.

We walked across town for a couple of beers and with eleven o’clock rapidly approaching decided that it was time to get something to eat.

In the UK this would have comprised either a kebab, pizza, or if you were lucky a last sitting at a curry house, but Neil and Rosa decided to introduce us to a new restaurant in Vegadeo, just over half way on the drive back to our hotel.

We parked up on the Avenida de Taramundi outside a non-descript bar (the one with the barrel in the entrance) which didn’t fill me with confidence, and had me wondering whether we’d anything in the car that would satisfy our hunger until breakfast. On walking in there were a couple of people at the bar but the rest of the place was in darkness. Rosa must hold some local influence. Within seconds the lights were on, the chef awoken from his slumbers, and menus in front of us.

‘Finess’ is not the word for this establishment, they have a menu with pictures (usually a no-no in my mind) and ten ‘specials’ which you order by number rather than name. We elected to share a portion of Pimientos de Padron for starters which arrived quickly and contained a couple of peppers of thermo-nuclear intensity. We’d barely stopped for breath and a swig of mouth cooling beer when the platters arrived, numbers 3, 5 and 7. 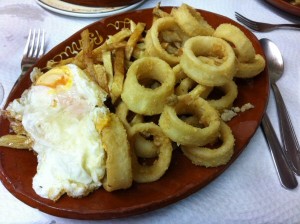 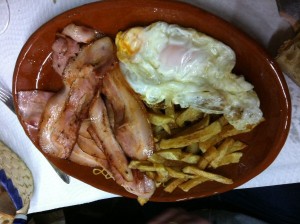 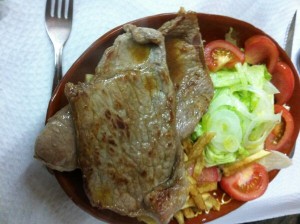 Half a cow and chips

Neil and I made valiant efforts to finish ours but Amanda left some chips…which is almost unheard of…and the salad didn’t get touched. The quantity was truly Galician and the quality was pretty good too. The cost, for the whole meal for four, with starter, beers and wines, was under forty euros (about thirty quid at the current exchange rate) and rather than a hungry wait until breakfast, we were wondering whether we’d need to eat again before we got home.

It was a great night out, with excellent company, and we’d had our fill of culture and cuisine. We’re learning that in Galicia you just have to ‘go with the flow’ and everything will work out brilliantly.

This entry was posted in Food & Drink and tagged Food, Neighbours, Ribadeo, Vegadeo. Bookmark the permalink.