I was quite surprised when the car ‘pinged’ at me on the turn of the key first thing this morning. Not the ping of another BMW problem, but the ‘ping’ accompanied by a ‘zero degrees centigrade’ readout on the dashboard. I’m in Spain for goodness sake, why is it freezing? 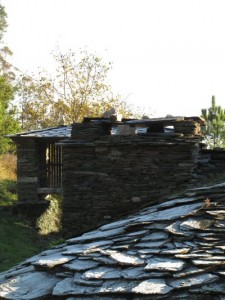 I gingerly made my way up to the house to rendezvous with the carpenter, Alessandro, at the barn so he could take the more accurate windows and doors measurements which would allow them to start their construction.

For the first time in my eyes the big house was covered in frost. Strangely it wasn’t on the barn, but as you can see it was all over the slate on the main house roof.

While walking around the perimeter of the house, and despite my feeble attempts in Spanish to warn him, our carpenter managed to step into a knee deep puddle, just where the ice cold water springs from the bedrock. His ‘hush puppies’ and corduroy trousers were saturated, mercifully in clean spring water.

I managed not to laugh, and uttered a heartfelt ‘lo siento’ (I’m sorry). He maintained some dignity, probably hoping I wouldn’t say anything.

Once he’d measured and re-measured everything we stood chatting in the sun, allowing his trousers to start the drying process, and he explained the reason for the wooden formula one car in his garage. His son, Bruno (Mendez), is a Formula 3 driver and despite Alessandro’s modesty a later Wikipedia search showed that he’s actually been World Champion. This, I guess, explains the brand new top of the range BMWs in his garage.

Although we’d planned to meet Facundo at the house, Alessandro had gone before my builder arrived, and after a brief chat we headed for a coffee and then to the bathroom place in A Pontenova. It was a small, and initially unpromising looking shop, hidden on a back street. But inside was a cornucopia of sanitary fittings, and more importantly tiles. 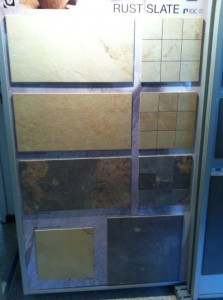 We must have spent an hour discussing options, exchanging opinion, and trying to decide what Amanda would, and would not like. In the end I made some executive decisions and plumped for Rust Slate Winter tiles on the bathroom walls, Rust Slate African on the floor, and a nice aged terracotta tile for the rest of the downstairs floor.

Remembering the lessons I learnt in England (from Amanda) I found a WC which I think matches her aesthetic requirements, and opted to get the sink and taps myself from a place I’ve seen in Lugo.

We worked out the prices with the shopkeeper and now all I have to do is check with Amanda that I haven’t made any catastrophic mistakes and then everything can be ordered as soon as I get back to Spain on the 7th November.

There is only a 50:50 chance that my selection will actually get fitted.