The rain in Spain stays mainly in Galicia

When I was here last year the weather was glorious. Long sunny spells punctuated by the occasional downpour with temperatures in the mid to late teen centigrade. This year, so far, has been totally different with downpours, fog, frost and wind punctuated by the odd sunny spell. That all leads to me living in a very cold apartment. I have bought a little convector heater but with such tall ceilings, and heat always rising, I think that it takes a couple of hours to heat the top six feet of the room that I am using it in and I am feeling very little benefit. 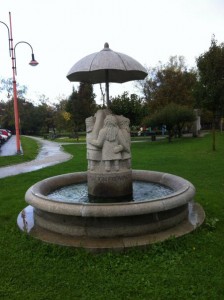 On a dank and cold Sunday morning, I made a ‘between deluge’ rush to the car and headed to the fortnightly market in Meira. The windscreen wipers worked overtime but with very little traffic the journey only took a steady half hour.

Although the market was reasonably busy, none of the interesting stalls containing bric-a-brac, old farm implements and antique oddments and fittings had braved the rain and set up to sell their wares.

If you wanted a really big pair of underpants, garish tea-towels festooned in 1970’s designs, or padded coats made in Eastern Europe then you were in luck. Those of us who like the interesting, quirky, random stalls, and to have the chance to buy bottles of the locals ‘witches brew’, were all sorely disappointed. Having already breakfasted on toast at a local cafe, with the consistency of floor tiles, I couldn’t even bring myself to feast on a plate of freshly cooked octopus. The pouring rain drove me back to my car, past the most apt statue of the day, and onwards to the flat in Taramundi. 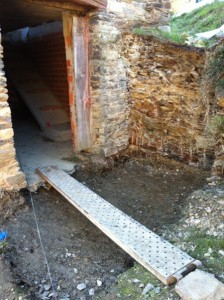 On the way home I called at the barn, in its hushed Sunday quiet, to take a photograph of the completed excavations of the foundations for the porch.

It’s is going to be a tad larger than the architect’s plans, to give enough space for a lift-up bench to be installed on the right as you enter, in which we will be able to deposit boots, wellingtons, umbrellas, and in Amanda’s case her running shoes.

I won’t even run for a bus, it’s not natural! I’d need to be being chased by something with massive claws or teeth, or both, to accelerate from a leisurely stroll.

Hopefully the concrete floor will be poured on Monday or Tuesday and then Facundo’s brother, Angel, who insists on calling me ‘Mr Paul’ will be on site cementing the bricks in place.

The quest for taps and other plumbing fittings goes on, but I have managed to avert one small disaster in the detail. Amanda asked me to measure the height of the kitchen window sill to ensure that the units she likes will not be too tall.

At 95cm they would have been, so I summoned Facundo to site on Friday and we discussed raising the sill and reducing the window size to make the units fit. He was surprised that I was asking for 95cm clearance as the Spanish norm is 85cm, is this just an indication that the Spaniards are generally a smaller race that Northern Europeans? Or is it that they like their worktops a little lower?

He soon spotted my real motive, which was to avoid the hour round trip to the carpenters in La Roda to explain the change face to face, and my builder agreed to call him and tell him of the requirements for a different dimension.

I’m becoming increasingly interested in football, not because of the game, but because it gives me a good excuse to be in the warmth of one of the bars or cafés of Taramundi. And that is where I am off to now, and tonight there are back-to-back games from 8pm, I sense a few beers are on my evening horizon.

This entry was posted in Local Life and tagged 13, Barn, Food, Meira, Weather. Bookmark the permalink.