Howling wind and what started out as a nasty steady drizzle had become a fully fledged monsoon by mid-afternoon. By the time I’d got home and spend a couple of hours trying to dry out my one pair of work jeans and work fleece by holding them in-front of my pathetic little halogen heater, I was in no mood to blog (as I’d promised) about Thursdays trip to the carpenters in La Roda. 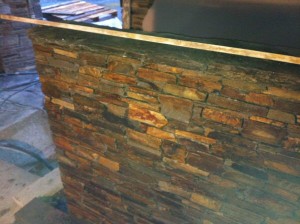 Friday had been a little productive, despite the weather, although the first job when arriving at the house was to repair one of the doors to the main house which had broken during the overnight gales. In the afternoon I spent an hour working with the ‘worker who I don’t understand…not a single word’ in selecting some old roof tiles to use to cap a wall which he has built by the staircase and which will be the backdrop for the wood burner.

After we’d finished with installing the capping stones, he showed me an old leather bound bible, magicked from a blue carrier bag, the type that chinese takeaways come in. Through our mutual Spanish intermediary Angel, asked me what language it was in. ‘Latin‘, was my answer, feeling quite chuffed with myself, and he then asked how old it was.

Having already seen the date in roman numerals (MDCCCXIX) on the third page of the book, I thought it was a trick question. ‘1819‘ I responded which prompted the kind of furrowed brow you would expect from someone who thought it was a lot older, and whom I’d now offended. ‘Is it valuable‘, he asked.

As I was already ‘in for a penny’ I thought it ‘might as well be a pound’,  ‘I doubt it‘ I responded, Angel doing a sterling job with the words. What makes me a bibliophile?, I thought to myself, as he put the bible back in its takeaway bag and went away to sulk.

Thursday had been a busy day, and you will have already read about the digger and the septic tank. In the morning I’d decided to go to La Roda to check on the windows and doors and re-assure myself that they were actually in production.

Alessandro, the man who suffered from embarrassing wet corduroy back in October, wasn’t there so his wife took me into the workshop (factory) to show me where they were up to. It was a good job I had gone because there were questions to answer on stain colour, shutter style, and door furniture. It turned out that they would have picked the opposite of what we like, had they been left to their own devices. 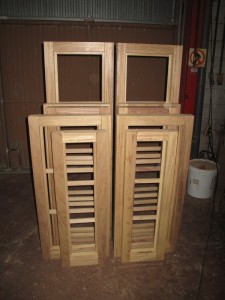 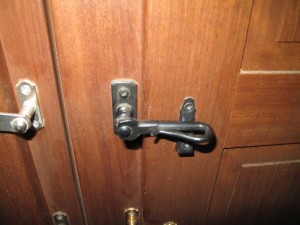 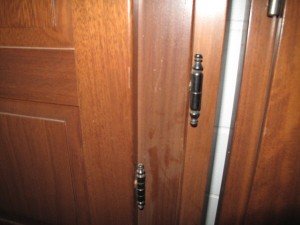 What followed was ten minutes of back and forth word association; Hamilton, Mercedes, McClaren, Button, Vettel, Alonso, Mansell, Senna, Prost, etc. Then we laughed, shook hands, and I departed, hoping that his wife had got a good memory for what we’d discussed prior to her husbands arrival.

At eight o’clock that night my phone rang, it was Alessandro, and he wanted to double check the details!