The car with the missing horses

I am back in Galicia and back to the place which is feeling increasingly like ‘home’.

I landed to find glorious sun on my balding, admittedly some would say bald, head and temperatures that were nudging towards twenty degrees centigrade.

I made the small mistake of booking a car rental with Hertz, who are situated at the entrance to the airport which is about 500m from the arrivals terminal at Asturias. They had sent me instructions to go to a meeting point and wait for a mini-bus but I couldn’t be bothered with the hassle, and decided to walk there in the glorious sunshine.

The lady behind the desk wasn’t impressed as her colleague was waiting for me at the terminal, so I elected to try and speak to her in Spanish and rescue my reputation. 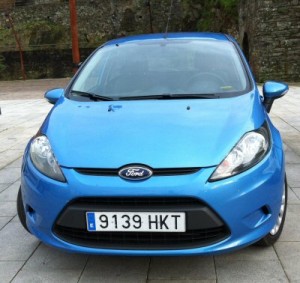 My new thrifty self had found a bargain, a bit smaller than I’d normally hire, but nonetheless a bargain. I was offered a choice, but sadly no upgrade, of; Fiesta, Corsa or Ibiza. I opted for Fiesta, which it turns out is a lovely metallic blue. Once on the road it took very little time for me to regret my penny pinching. I suspect that half of the cars sixty horses (they make cars with just 60hp?) are out grazing, because they aren’t under my right foot and the 0-100 km h acceleration would be best measured on a calendar.

If I do get caught speeding (again) in this hire car I deserve a medal and a letter from the King, rather than a ticket.

I couldn’t resist going straight to the house to check on progress and I can’t deny that the lack of doors and windows was initially a bit of a disappointment. 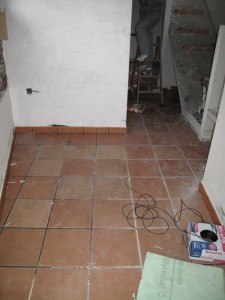 Although the place is not watertight the builders have achieved quite a lot during my two week absence. The bathroom is now fully tiled, as is the whole of the downstairs floor with the exception of the porch. The upstairs floor has screed, and the concrete base is there for the ‘wood store come boiler house’ that is been built on the gable end near the road.

The electricians men were also there putting in the kilometres of cabling which is necessary for the uprated electrics, although the feed has not yet been modified to take it underground from the overhead pole on the edge of the land.

We really are getting very close now and I left much happier than I arrived. Tomorrows’ task will be to see what is happening with the doors and windows. Hopefully they will be arriving tomorrow, perfectly timed for my return.

But I’ll not hold my breath.

Finally, a quick ‘get well soon’ to my lovely Aunty Pat who I know reads my blogs. I hope that they go some way to keeping you entertained while you recuperate.

This entry was posted in Barn Renovation and tagged 13, Asturias, Barn, Renovation, Windows. Bookmark the permalink.

1 Response to The car with the missing horses