When one (donkey) becomes four (horses)

It’s been a pretty dull, in several senses of the word, few days. Facundos’ men left the barn on Thursday morning to attend to something that was obviously more pressing, and everything has been still and quiet up there until today. Add to that the rain, and that nothing except football is happening in Taramundi, and you get the picture of a boring weekend. 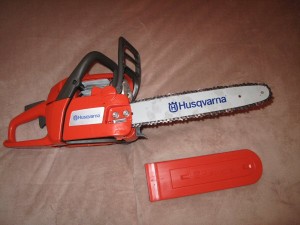 On Saturday I took the advantage of some good weather and the continued good nature of my friend Neil and donned my boiler suit, goggles and ear defenders for a chainsaw lesson with my newly assembled Husqvarna 236-14″. After dismantling one of Neils old chainsaws, sharpening the chain, and re-assembling we headed for his woodpile for some hardcore cutting action, on some ancient oak.

You’ll be pleased to know that I survived intact, and that no-one else sustained any injuries.

They are fearsome machines, absolutely lethal, and I am glad that Neil took a couple of hours to impart his wisdom. Never having the need to touch one in England, let alone wield one, I didn’t realise quite how complex they are. You have to consider the oil/petrol mix, chain lubricant, sharpness of the teeth, the chain brake and adjusting the chain tensioner. I’m looking at lumberjacks in a new light, they are definitely not all singing and checked shirts.

I was determined to put my new skills, and new machine, into practice up at the house. I need to cut, and store for drying, the trees which we ‘accidentally’ felled while installing the septic tank. They currently reside half way down a slippy forty-five degree clay slope, not the easiest thing to get to carrying a chain saw.

Frequent rain showers meant that I was constantly dodging in and out of the barn, and to be honest I think that there is a fine line between the saving of effort that a running chainsaw has over and handsaw, given the shoulder wrenching exertion required to start the damn things with the rip-cord.

I think I need to give it a name, remove some of the fear. ‘Clive’ seems very non-threatening. 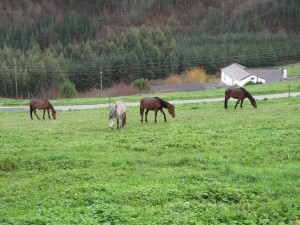 There has been no sign of Enrique on our finca since the middle of last week, but I can hear him somewhere in the valley. Instead we’ve now got four horses, which I assume belong to Carlos. Fortunately they are not mounted by four horsemen, that would be apocalyptic!

I’ve decided to keep the musical theme and call them; John, Paul, George and Ringo.

One has particularly straggly hair and can be George, and the only white one is obviously Paul, but I’m struggling to tell the difference between John and Ringo. 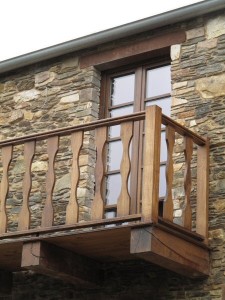 One of Facundos workers was at the house, single handed (until I helped him), installing the window facing the cabazo and the doors onto the balcony. There is just the kitchen window left to fit, and the small stable window to be fitted with the stained glass and we will be totally secure.

It really is starting to look more than great.

I am absolutely delighted with the windows and doors, they are just so tactile. I can’t stop opening and closing the internal shutters. I’m like a big kid!