A night of two feasts

We’re back in the UK for a while, but not without one final Spanish adventure.

On Friday we’d popped to our new neighbours, the ones from Madrid, to drop off a key and ask if they would be so kind as to let in anyone making a delivery. During the conversation we were invited for a Saturday ‘snack’ of home-made empanada, and we gladly accepted.

Saturday was spent at a quiet house with some ‘us’ time, mainly for Amanda to bond with he future home, but also because I felt that I’d subjected myself to enough miles in the horse power deprived little Fiesta. As no-one had been available at the hotel to take our payment in the morning we returned to Taramundi mid-afternoon to settle the bill, before visiting the Madrillenos for the ‘snack’.

We took Nati a bit by surprise when we knocked on her door at about 4:30. She was up to her elbows in pastry. It appeared that we were unfashionably early. Amanda explained that we’d not eaten and Nati told us that she thought we were coming for dinner! A typical misunderstanding in such an informal society.

I gladly accepted six-year old Oscar’s invitation to look at his Dads’ chickens and left Amanda to explain that we were expected at our friends, Stephen and Kay, at 7pm for dinner.

Undaunted by our early arrival, Nati pressed on with the cooking. 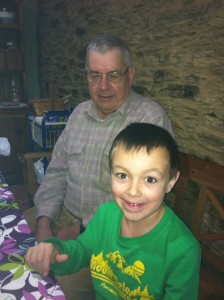 Within an hour we were sat in front of a delicious empanada, a spanish omlette the size of a tractor wheel, a plate of cakes, crepes brought up to the house by Elena and Miro, and a Tarta de Santiago. With the exception of young Oscar, who was busy playing ‘Angry Birds’ on my mobile phone, Nati’s family and neighbours Elena and Miro weren’t eating, they just sat and watched Amanda and I try to tackle the food mountain weighing down the table!

At 7pm, our supposed arrival time 30km away in Trabada, I texted Stephen. ‘SLIGHT PROBLEM. KIDNAPPED BY NEIGHBOURS AND NOW BEING FORCE FED. SORRY. SEE YOU WHEN WE CAN.’

At 8:30 we made our excuses, gave our thanks, exchanged kisses and ran to the car for the cross-country dash to Trabada.

Stephen and Kay aren’t easily flustered and tonight was no exception. 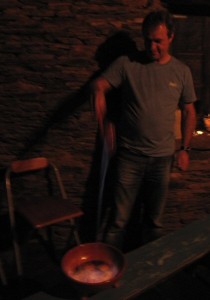 Once we arrived we felt instantly at home, as I always do. After a few more beers Stephen presented a spicy Thai fish soup followed a fabulous Thai seafood curry. Kay offered us a get-out on the cheese final course and we accepted before retiring, doubly full stomached, to their renovated bread oven for a traditional Galician Quiemada.

Kay, and a Gallego friend, had spent hours translating the ‘chant’ to ward off evil spirits from Galician into English and she did the honours in protecting us all from the Worlds nasties while Stephen and I tried to avoid burning our hands mixing the flaming pot of alcohol with a ceramic soup ladle.

It’s an interesting taste of alcoholic fruit with the sweetness of sugar and the bitterness of coffee, and much better warm than cold!

Amanda and I slept well, two feasts and plenty of alcohol did the trick.

This entry was posted in Local Life and tagged 13, Food, Galicia, Neighbours. Bookmark the permalink.

2 Responses to A night of two feasts