I can’t believe how fast this week has gone, and how exhausting painting can be. If I never see another drop of white emulsion again, it will be too soon. We’ve used close to 30 litres to paint the living room and the bedroom, and it’s not as if the barn is a mansion…it’s a barn.

We leave tomorrow, having achieved about half of what I had intended before we arrived, and knowing that we won’t be back until mid-October, and then it isn’t really a working visit.

But this has been a trip of birth, in more ways than one.

It has been the birth of the barn in terms of both Amanda and myself being able to stay here, and it feel like a home. I’ll admit that with the exception of the newly kitted out kitchen and the luxurious bathroom (which is almost fully functional), it still feels a little like camping, but we are getting very close.

There have been two other births, the first on our land where Carlos is currently keeping his horses, having moved the donkey Enrique somewhere else in the valley where his occasional braying can be heard. On Sunday night one of his mares gave birth to a lovely little foal, which is a little camera shy. She allowed me to snap her picture, with her mother, from the car window as I headed to A Pontenova for yet another tub of paint. 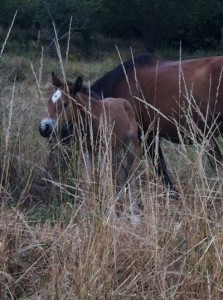 The second was shown to us by an excited Dolores who has adopted a stray cat which she allows to sleep in her woodshed. On the fourth of July, out popped four of the cutest little kittens which she is now trying to re-home, including suggesting that our new barn would not be compete without a ‘kitty’. 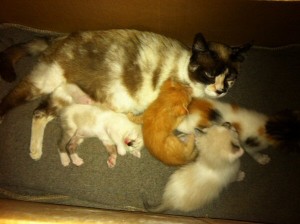 The bad came on Wednesday night, and hopefully won’t be followed by two more, as eighty people were tragically and horrifically killed when a train left the rails about 120km away from us in Santiago de Compostela, on the eve of the big celebrations for ‘Galicia Day’.

It is all that the neighbours, and anyone else for that matter are talking about, and understandably so. A truly awful situation and the worst train accident in terms of ‘loss of life’ in the history of Spanish rail travel.

Puts everything else into perspective.