I lived out in Abu Dhabi (U.A.E) on and off for three years back in the early nineties while providing endless IT training courses for the Town Planning Department. Life back then in the Emirates was at a very slow pace (a little different to now) and once you got used to the stifling heat it was a very pleasant and chilled place to spend your time.

One thing that I loved to do was to get my daily copy of the English language ‘Gulf News’ and chuckle to myself at the mundane stories which made the front page in a place where crime was almost zero. Memorable headline stories included; a single vehicle road traffic accident in which no-one was even mildly injured; a man who accidently left a shop without paying for a packet of cigarettes; and, a lady who’d lost her purse only to return to her supermarket and find it on the fresh fruit counter, where she’d accidentally left it a week earlier.

You knew you were in the safest of safe places with no need to fear for your personal or possessions safety.

Now I’m not claiming that Galicia is crime free, and with the economic ‘crisis’ there has been an increase in burglary and theft, but is is far lower than the Spanish or European averages. I have been pleased to note, however, that the local newspapers (including regional) have been filled with ‘Gulf News’ like controversy over the weekend with a story which wouldn’t merit a single column centimetre in the Huddersfield Examiner.

The full facts have yet to be established but it appears that the tiny ‘Madonna’ from the church in Conforto (on the road from A Pontenova to Taramundi) has been subject to some shenanigans.

The congregation arrived at the church recently to find that the Madonna had gone missing, only for her to re-appear a couple of weeks later wearing a new gown, new crown and without some of her original jewels.

The community was in uproar and questions were asked at the highest level.

It appears what had happened was that, with the best of intentions, the priest had taken the Madonna away for a refurbishment without the permission of the local parishoners who were all distressed and her disappearance and at what was returned in their Madonnas place.

Rather than resolve the issue with the priest the police were called and allegations of theft were made against the clergy. There has been uproar and the whole of the local community has become involved.

The priest has now made a full apology through local media suggesting that he thought the local congregation would be pleased with the ‘upgrade’, but it doesn’t look like the controversy will by dying down anytime soon. 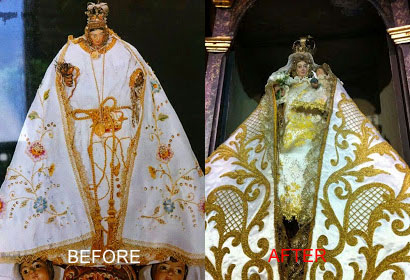 You have to chuckle at the triviality of it, but in these current times I think it is indicative of the tranquility of the area that this is the focus of local attention. Personally I think that the Madonnas make-over is an improvement (judge for yourself from the picture above) and looks far more regal in her new garb.

If the whole thing is a publicity stunt to get more people to visit the church in Conforto then it has worked, as I’ll definitely be popping in for a look on our next visit.

This entry was posted in Local Life and tagged Asturias, Galicia, Neighbours, Religion. Bookmark the permalink.