There is a romantic yuletide notion about country living, one borne out by countless films, TV advertisements, festive cards and music videos. It is that you can just wander up into the forests, fell your own Christmas tree, and carry it home over your shoulder to the appreciation of your wife to be adorned with baubles, lights and tinsel. 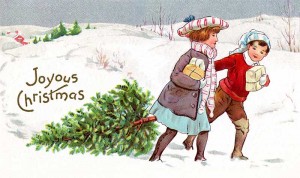 I am sad to report that it doesn’t happen anything like that!

Admittedly we’d left it late when we enquired of our neighbour, Elena, the best place to buy a Christmas tree. She shrugged her shoulders, enquired as to our preferred genus, and then suggested that we just go into the forest and get one. I smiled, but I’d instantly visions of incurring the wrath of a distant neighbour, which would develop into the kind of blood feud that would run through generations, the kind where the original reason was lost in the mists of time. Amanda and I looked at one another, with that knowing spousal look that while this sounded like the most romatic of ideas, we’d just go to a garden centre and buy one.

But mid-way through the following morning Elena arrived, gingham smock and all, carrying a deadly looking scythe and offered to take us ‘tree hunting’. We donned our work gear and boots and trudged off into the hills on a two hour, ultimately fruitless, quest.

Nothing we saw matched our (Amandas) expectations. Every candidate that looked great from a distance looked rubbish from close up. They were all; too tall, too short, too bushy, too sparse, or simply too inaccessible. Elena got bored of the ‘picky English’ and we called it a day, thanking her for her help.

Tomorrow, we decided, the last Saturday before Christmas, we’d go to a garden centre and get ourselves a lovely Christmas tree, and all would be well with the world. Well, that was the plan.

After three garden centres, and a 100km round trip, the penny dropped. Galicians don’t do real Christmas trees, and if they do, then they have already bought them way before the last Saturday before Christmas. Now I had a depressed Amanda and I was in the doghouse, as though it was solely my fault.

After a very quiet and contemplative lunch  it was after three in the afternoon and we’d one last throw of the dice. I chucked a saw, the axe and the chain saw in the back of the car and we set off for a remote hillside that we’d spotted a couple of days earlier while out driving.

And this is where the reality deviates, at 180 degrees, from the romantic notion. Where your brain now pictures lightly falling snow, the jingle of bells in the distance and small cottages with warm glowing lights; the reality is waist deep brambles and gorse, midges and mosquitos looking for a dusk time snack, and wild boar tracks indicating that we were far from alone.

After considering and debating the merits of twenty plus candidates we settled on a five metre tall pine tree, just far enough away from the road to be out of sight of any approaching traffic, and on level enough ground for me to be able to swing an axe unencumbered. We didn’t want a five metre tree, but the top two metres looked as though they would make an acceptable festive decoration (to my eyes at least).

Trees don’t fell as easily as you see in the films. Instead of three blows with a mighty axe, it took more like fifty-three, but eventually it fell, and to Amandas surprise it toppled in the right direction. I quickly lopped off the top two and a half metres with the saw and slung it over my shoulder for the perilous expedition back to the road.

Cut and bleeding from countless lost battles with brambles, tree stumps and gorse we were almost at the road when we heard a car, the first to pass us for about an hour. I dropped the tree and tried to look like a rambler  despite being up to my elbows in undergrowth. It was the post-mistress, but thankfully she didn’t stop to say hello.

The tree just fitted in the car and we got it back to the barn without further incident. I spent the night expecting a knock on the door, which, once opened would see me face to face with a shotgun wielding local who would then accuse me of ‘tree rustling’, pointing at the two and a half metres of evidence overnighting in our wood store.

But fortunately the knock never came. 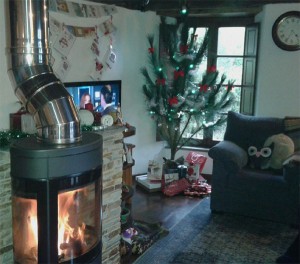 Today we put it in its bucket and adorned it with baubles and glittery things (well Amanda did).  It is now surrounded by the gifts which our families so kindly gave us before we left in November.  Amanda isn’t particularly happy with the tree but accepts it is probably as good as we could get with six days left to the big day.

I think that it looks smashing, very rustic, and almost worth all the scarring to my lower limbs.

This entry was posted in Local Life and tagged 13, Barn, Christmas, Galicia, Neighbours. Bookmark the permalink.