I’m not particularly proud of myself but sometimes ‘needs must’.

We, or should I more accurately say Amanda, has committed an antrocity. There is simply no other way of describing her actions and in supporting her, however passively, I feel complicit in her crime.

Almost since we arrived last November, we’ve been bothered, for it never went beyond bothered and certainly never as far as pestered, by ants. A local colony seems to have an ant superhighway which runs past our front door and every now and again one, or more frequently a group of them, decide to stop off at the ant service station that is our kitchen. They don’t seem to do any harm, they just mill around our muddy boots and sweeping brushes, but we’d rather that they didn’t make a habit of it.

After an Internet search we first tried a physical barrier in the way of a line of talcum powder across the threshold. It works a treat but does look like we’re involved in some strange ‘white powder on the doorstep’ cult, or at least that we are a little bit eccentric. When the winds get up it either blows away or blows under the door and ends up all over the kitchen. When it rains it turns into a white sludge which then gets trodden in by ourselves, and ends up all over the back-end of our doorstep loving cat, Bonita.

So, Plan B. Amanda bought some traps from Eroski (the local version of Tesco, but profitable), and we put one inside the door. I’ve spent time watching it and the way that it seems to work is that it attracts the ant which then gets stuck and doesn’t come out. I’ve seen several go in, but none emerge. I suspect that it is a piece of extra sticky fly paper with some irresistible ant bait, and imagine that the one strategically placed inside our door is now full of ants which are stuck to the spot and ruing their greed and stupidity.

But it doesn’t stop them coming in. So we’ve resorted to Plan C. 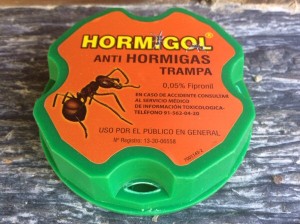 If the Eroski trap was an ant catapult, Amanda has now gone for the full ant nuclear missile solution, a little green octagon called ‘Hormigol’. What this one does is it attracts the ant, the ant picks up a slow acting poison (not voluntarily) which it then carries back to the nest and infects the entire colony. Within three days the instructions say that the entire local population will be wiped out, and hopefully our superhighway will be returned back to a sleepy country road.

When she deployed her tactical nuclear warhead it was a hive of activity with a procession of ants to and from it, over the space of about six hours. There is something inside that little green octagon that ants love, and I’m very pleased that it was deployed outside and not inside. Twenty-four hours later the procession has stopped, we appear to be antless, Amanda has wrought death and destruction on an epic scale.

Our green sentinel is still on the doorstep but eerily quiet, an octagonal monument to Amanda’s antisocial antrocity.