Dusk had already long since fallen on Christmas Eve.

I was outside testing the motion detectors on some new lights I’d installed to give Amanda additional security while I was away in Belfast, standing motionless until they went off and then waving my arms about like a nutter until they came back on. We were planning to start preparations for Christmas dinner, have a snack, and hit the sofa in front of a raging fire for the traditional Christmas Eve watching of ‘A Christmas Carol’, the 1999 version with Patrick Stewart.

Then a car drove up the hill and there was a knock on the upstairs door, Amanda answered, as I was in a ‘standing still’ phase of testing.

It was Manolo, the brother of Elena, who lives in the bottom half of the village. He’s previously invited us for ‘a coffee’ and we’ve smiled nicely and never actually gone, but this time he’d deliberately driven half a kilometre to come and invite us to his house later on that evening. As it was already after eight, Amanda explained that we had prepared our evening meal and that we wouldn’t eat, and asked him to be more specific on a time. He said ten to ten thirty, when they would have eaten their traditional Christmas Eve feast. He was thanked for his trouble and we said we might see him later.

We had no real option but to go, as we felt that ignoring his kind offer could only offend, despite us having already planned our evening not to include either visiting a large local family or getting so drunk that sleep was the only option.

At ten thirty we set off to walk to Manolo’s place, clutching a solitary and inadequate box of English Chocolates, and followed by Kit the Cat. Our repeated attempts to tell her to ‘go home’ fell on deaf ears as she ran ahead of us, coming back regularly to check that she was going in the right direction, until she heard Manolo’s dog bark causing her to disappear into the undergrowth.

When we arrived at the massive farm house we were met at the door by one of Manolo’s daughters who explained that they’d just finished their starter but inviting us in and giving us a plate.  Within minutes we were welcomed and kissed by everyone, had been sat at the head of the table, and each of us had a glass in hand and a bottle of red and white wine uncorked and set down in front of us. We watched, feeling like spare parts, as they noisily ate the rest of their meal while practicing their English on us. Every dish which arrived was offered to us by a different relative, and courteously declined, and whenever we took a sip of wine, someone came and topped up our glasses. 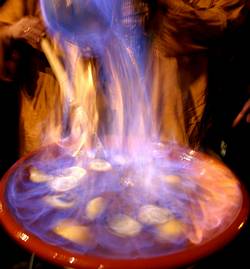 Coffee followed the meal, then Champagne, then ‘Orujo’ (the local fire water), then the bottles of spirits hit the table and finally the lights were switched off for a local Galician traditional Queimada supported by enough blocks of sickly Turron to build a small house.

It was getting close to midnight. Any thoughts of watching a grumpy but ultimately ‘saved’ Patrick Stewart were a long gone memory, and I was feeling rather the worse for wear at having accepted our neighbours alcoholic hospitality in quite the quantities that had been offered.

We were trying to get out of the door and off home before the witching hour, and Santa made his annual appearance, but there was no chance. The kids in attendance ratcheted up the volume another notch and the distribution of presents signified that Father Christmas had indeed arrived at Manolo’s house.

Around one in the morning we finally managed to make our excuses, with the party now in full swing. We called Kit, who had been entertaining herself hiding and probably mostly sleeping for the last three hours, and stagger back up the hill home, clutching a gifted bottle of precious home-brewed lethal ‘Orujo’ from Manolo.

It had been a privilege to be invited into the heart of a local families Christmas, and we had both enjoyed it tremendously. The whole episode also goes to serve as a reminder that you can never expect to stick to your own plans in Galicia, and all too often, events totally outside your own control do take over.