Vote ‘Remain’… Or The Cat Gets It! 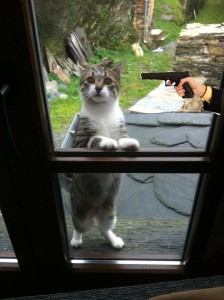 I’m not one for getting political on here…but my hand has now been forced.

Over the next four months (yes we’re going to have to put up with just one news story for the next third of a year) I am sure that you will hear a lot of convincing arguments from both the ‘remain’ and ‘leave’ campaigns on the European Union debate.

As a couple of ex-pats who have made their home in Spain we’ve already nailed our colours to the mast by embracing Europe, and all that is European, so you would be right in expecting that we’ll both be backing the ‘remain’ campaign.

I’d be happy to sit down with anyone over a decent bottle of malt whisky and explain at length why I believe that it is not only the right decision for me and the two million other ex-pats residing in Europe, but also for those of you who live in the UK, to vote ‘remain’. There are many good reasons why the UK should remain, and very few valid (non-hysterical) reasons why it should leave, but in the interests of brevity I’m just going to pick up seven, admittedly mostly very personal reasons, why the UK should ‘remain’.

Should the UK vote to leave Europe then any, and every, UK citizen living and working within Europe would lose all of their rights to be in that country. Although the details of what would happen have not been ironed out (and can’t be until the vote has been cast), for Amanda and myself, it would likely mean that overnight we would become illegal aliens and be subject to a rapid and forced deportation back to England until we could successfully apply for residence and work visas.

Given my self-employed status and Amanda’s part-time/temporary work in Spain then it is highly unlikely that we’d be granted anything other than tourist visas. We would be able to return to Spain for occasional holidays, but not as permanent residents.  We wouldn’t be alone, there would literally be a million other ex-pats in Spain like us, all needing UK housing, UK health care (which pensioners would no longer be entitled to in Spain), and UK state benefits until we find our feet on the newly flooded employment market.

There would, of course, be some jobs available due to the expulsion of between two and three million Europeans who had made their lives in the UK. Doctors, nurses, teachers, academics, the guys who clean your car so cheaply, make your hotel beds and serve your burgers would all be packing their bags and going back to their country of origin to queue outside the British embassy in the hope of getting a UK working visa.

With one million other ex-pats being expelled from Spain and their property hitting the open market, along with the horrendous state of the property market here, we would be unlikely to sell the property into which we have sunk our life savings, leaving us homeless and potentially bankrupt.

We would have to find somewhere to live in the UK, possibly having to rely on state handouts to do so, and joining a queue of up to two million other UK citizens who currently reside elsewhere in Europe, who are all in the same boat.  We would be back as a burden on the UK health care system and at least initially we’d have to seek benefits just to live day to day.

Flooding the UK Job Market/Ranks of the Unemployed

We’d have to jump back in the UK job market looking to take professional jobs that we don’t really want, from those who really need them.

Both ourselves, my brother-in-law (who lives and works in the middle east) and one of Amandas’ cousins (America) have decided to make our lives and livings outside the UK. In our adopted countries we are the exact same immigrants who are attracting the uninformed hatred and vitriol in the UK which fuels the ‘leave’ campaigns arguments. We believe in the freedom of movement and the freedom to work overseas that the ‘leave’ supporters wish to remove.

The Cat Gets It

As we’d be forced back to the UK at short notice, and with an end to free travel to the UK for pets (due to the cancellation of EU pet passports scheme), we’d have to try and find a new home for our cat Kit, or as there is no shortage of cats here, we’d have to have our perfectly healthy cat put to sleep.

There are two distinct types of jobs which those from Europe residing the UK undertake. These are either the professional jobs for which there is a shortage in the native UK workforce (doctors, nurses, surgeons, teachers and academics) or those who will do the jobs for minimum wage which the workshy endemic population won’t touch (shop work, restaurant waiting on, farm labour, cleaning), preferring to stay at home on their benefits and watch Jeremy Kyle.

The benefits issue is one of the UKs own making and one which it can un-make while still a part of the European Community. The benefits which the UK has set are to its own rules, and these rules differ in every other state of the Union. In Spain for example, there is no child benefit, unemployment benefit ends after a year, and there is no free medical care. If you’ve not paid into the social security system then you are entitled to absolutely no benefits. Here as British citizens we are treated exactly the same as a Spaniard is treated, and there in a nutshell lies the problem. European law demands that within Europe any European citizen is treated in the same way as that countries national. Change the UK benefits system for all and it would eradicate the perceived ‘benefit migrant problem’ in a heartbeat.

If the vote in four months’ time results in a ‘leave’ then essentially our dream would be over and our lives turned totally upside down. We’d likely have lost everything that we’ve worked so hard for over the last twenty-five years and would have to start over. Since moving to Spain fifteen months ago we’ve been happier, healthier and more relaxed than at any other time in our lives, but a vote for ‘leave’ will almost certainly take all of that away from us.

So next time you feel like supporting Nigel Farage, Michael Gove or Boris Johnson (or any other obnoxious right wing politician) just take a second to think what it will actually mean on a personal level to the lives of the two million ex-pats who will have to flood back to the UK.

Don’t just take my word for it. Take a look at these other comments;

What Happens to British Ex-Pats If….

This is what could happen if Britain Leaves the European Union

Fate of UK Expats in Case of ‘Brexit’ Unclear

What Would Happen to ex-pats if Britain Left the EU?

Ex-pats in Spain Unsettled by Referendum on Brexit

It has been mentioned that in the case of a ‘Brexit’ we would be offered protection in Spain under the ‘Vienna Convention on the Law of Treaties 1969’, however, this would not apply in our case as we have not met the accrued rights of having been resident in Spain for at least five years.

This entry was posted in Background. Bookmark the permalink.